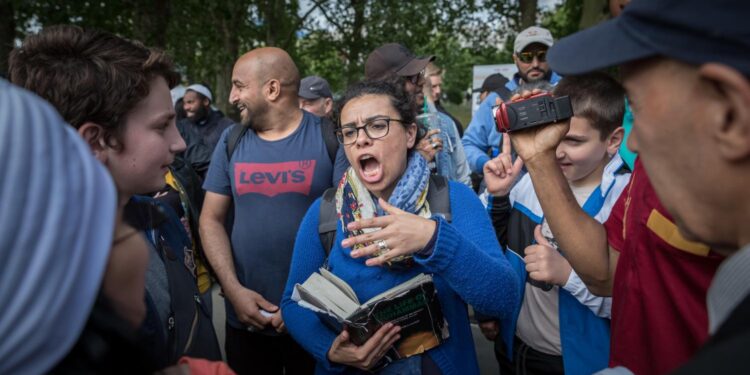 In my capacity as General Secretary of the Free Speech Union, I went to Speakers’ Corner on June 27th to celebrate its 150th anniversary, only to discover that the Christian preacher Hatun Tash, a member of the Free Speech Union, had been arrested by the Metropolitan Police the day before. In a scandalous miscarriage of justice, she was arrested after being robbed – you read that correctly – and taken into police custody for 24 hours where, among other things, she was strip searched. She was later told by the police that the reason she’d been arrested was because she was wearing an ‘offensive’ t-shirt – it reproduced one of the Charlie Hebdo cartoons of the Prophet Mohammed.

The Free Speech Union wrote to the then Acting Commissioner of the Metropolitan Police, Sir Stephen House, to complain about the arrest of our member, asking for an apology. (You can read that letter here.) We also wrote to Dame Cressida Dick, then the Commissioner of the Met, the year before about another occasion on which Ms. Tash had been arrested, seemingly for the crime of being ‘offensive’ to the Muslim young men who frequent Speakers’ Corner, again asking for an apology.

Well, yesterday, Hatun Tash finally got that apology. Thanks to the efforts of the Christian Legal Centre, who helped her bring a legal case against the Met, she has also been paid £10,000 in damages (which she has given to Christian Concern). The Times has more:

The Met police has paid £10,000 in damages and apologised to a Christian preacher who was wrongly arrested twice at Speakers’ Corner in Hyde Park.

Hatun Tash, an evangelist who regularly critiques and debates the Quran and Islam at the park, was arrested in 2020 and last year.

On both occasions, Tash told officers that she was being harassed and threatened by Islamic protesters. Instead of protecting her, she said, the police arrested her for breaching the peace and other public order offences.

One one occasion she was interviewed under caution and held in custody for 24 hours before being released and the police took no further action.

Tash brought a legal challenge against Scotland Yard, alleging wrongful arrest and unlawful imprisonment. Her lawyers said it was “abundantly clear” that the evangelist should not have been arrested.

“The police should have protected her free speech by bringing more officers to Speakers’ Corner to facilitate her rights,” her legal team said.

It has now emerged that the police have agreed to pay Tash damages and to cover her legal costs. A letter from Inspector Andy O’Donnell, from the Met’s professional standards directorate, apologises to her “for the distress that you have suffered”. He said he was “satisfied that on these occasions the level of service did fall below the requisite standard”.

After Tash’s experience, Toby Young, the political commentator and founder of the Free Speech Union, wrote to Cressida Dick, the Met commissioner at the time, asking her “to train your officers to avoid acting in a way that is incompatible with free speech rights”.

This is a good result, but the question is whether the police are going to mend their ways and stop arresting people for the non-crime of being ’offensive’. I’m not going to hold my breath.

Stop Press: You can read the Christian Legal Centre’s press release about the victory here.