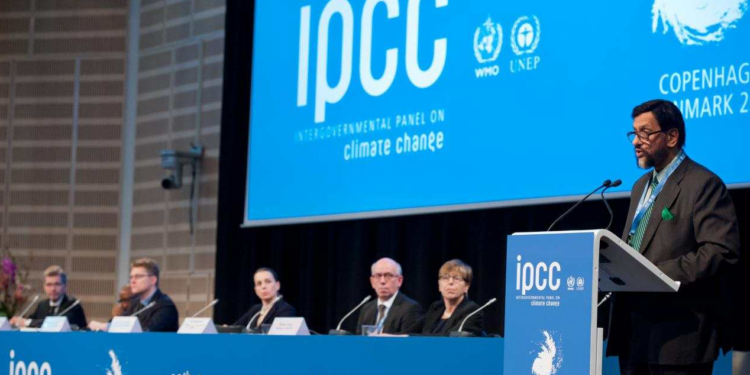 A damning new report has blown open the process by which some of the science work presented by the UN’s Intergovernmental Panel on Climate Change (IPCC) is twisted to fit a political narrative through the accompanying Summary for Policymakers (SPM), which is compiled by governments. Further spin is then applied by press releases, which are reported mostly without question by the incurious media. The investigative report written for the Global Warming Policy Foundation (GWPF) shows a large gulf between the science presented and the perception of the public. The progression from the initial IPCC report to press release provides “ample opportunities” for the message to be distorted, “either wilfully or not”.

In the latest Summary for Policymakers issued last year, the ‘infamous hockey stick’ was revived showing little global warming over 2,000 years, and a sudden, dramatic uptick over the last 150 years. The hockey stick first appeared in the third IPCC assessment report in 2001 but was omitted from subsequent work. It was the creation of the IPCC author Michael Mann, and was widely debunked since it ignored the higher temperatures in the medieval warming period (MWP) and subsequent cooling in the little ice age (LIA).

Figure 1 above “illustrates very clearly” how the science can be lost in translation, the report notes: “Figure 1, or discussion of it, does not appear anywhere in the body of the report”. Yet the SPM is presented as an easy and more concise guide to the full AR6 IPCC report.

The GWPF report is written by the retired physicist Dr. Ralph Alexander. He notes the widely reported statement made by UN Secretary-General Antonio Guterres last year following publication of a supplementary IPCC working group report. It was a “code red” for humanity, claimed Guterres, adding: “The alarm bells are deafening, and the evidence is irrefutable.” Alexander notes that the wording may have been chosen for maximum political impact, but it had “little connection” to the science reported in the latest assessment report known as AR6. As if that was not bad enough, “the scientific message becomes even more contorted as the media and environmental organisations pick up on the IPCC’s press releases,” said Alexander.

The various warming periods over the recent past have long been disputed by climate alarmists, eager to place all the blame for temperature rises on humans burning fossil fuel. But there is strong evidence for warming in the medieval period, with AR6 citing a 2016 summary paper from two Danish climate researchers, Christiansen and Ljungqvist, that found nine temperature reconstructions had their warmest day in the 20th century, compared with 67 in medieval times. In addition, alarmists try to suggest that any warming only occurred in small areas of the northern hemisphere. But Alexander presents the graph below that shows a temperature reconstruction for Antarctica.

As can be clearly seen, the area had an extended warming period followed by a distinct period of cooling. Current warming is barely registered.

One critic of the Mann hockey stick is the Canadian mining analyst Steven McIntyre. He is said to have discovered that – regardless of the IPCC’s deceit in displaying a graph in the SPM that is not backed up by the assessment report itself – many of the temperature reconstructions cited in AR6 are faulty, “because they rely on cherry-picked or incomplete proxy data”.

The evidence gap resulting from what the GWPF report calls “whispered messages” from the IPCC assessment report to the Summary for Policymakers is shown to be distorted further in the IPCC press releases. Many of the changes observed in the climate are claimed in the press releases to be unprecedented in thousands if not hundreds of thousands of years. Alexander notes there is no justification for calling changes unprecedented in “hundreds of thousands of years” – the press release has “no basis” in either the AR6 or SPM, he writes.

One media outfit that picked up on the hockey stick was Yale Climate Connections, which suggested that to find a warmer period than 1850-2020 it is necessary to go back more than 100,000 years. It described the IPCC report as taking “an arresting new look at observed global temperature”. In just three whispers, noted Alexander, the IPCC’s relatively neutral stance on the MWP and the LIA, “has disappeared and been transformed into the hockey stick”.

Alexander also examines the treatment of “marine heatwaves”, with the latest SPM declaring with “high confidence” they have approximately doubled since the 1980s. He notes that this strong statement is not justified by the discussion in the underlying report, “which fails to present any convincing empirical evidence for such an assertion”. In fact, he notes that the IPCC cites a paper revealing that marine heatwave frequency rose by only 34% from 1925 to 2016, not the 100% that would be “doubling”.

Earlier this year, two American atmospheric scientists, Professors Richard Lindzen of MIT and William Happer of Princeton, told a U.S. Government inquiry that climate science “is awash with manipulated data, which provides no reliable scientific evidence”. They were particularly scathing about the IPCC summaries for policymakers which are written primarily by government representatives, and are often compiled before the full assessment report is completed. In their opinion, the summaries are “merely government opinions”.

Presumably they think even less of the press releases which are fed to unquestioning journalists and published as tablets of stone to further the progress of the command-and-control Net Zero political agenda. As a result, concludes Dr. Alexander, the IPCC’s “fairly impartial” stance on past warming trends and marine heatwaves “becomes warped” to the point where agenda-driven governments, via the Summary for Policymakers, can declare modern warming to be unprecedented.

The Tories Should Call a General Election