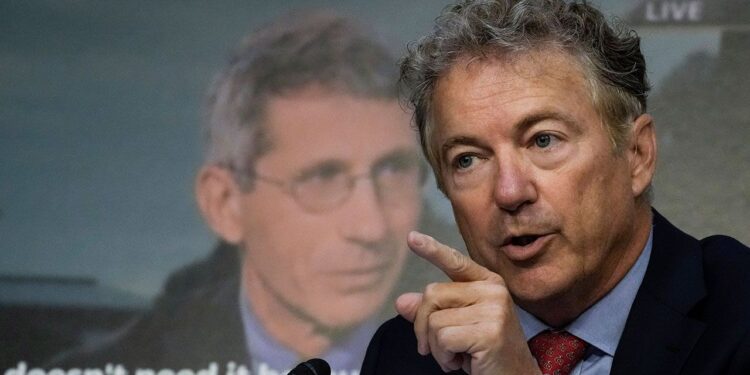 U.S. Senator Rand Paul has been locked for two and a half years in a lonely battle against Anthony Fauci, the Centers for Disease Control and the mainstream press as they push pandemic restrictions on the population and the Kentucky Senator pushes back. John Tierney in City Journal has suggested that it is like a real-life version of Mr. Smith Goes to Washington, the Frank Capra movie where one brave senator singlehandedly defends the commonwealth against the thoroughly corrupt political and journalistic establishments. On one occasion when pleading with Fauci to stop locking down Americans in their homes, Paul invoked Friedrich Hayek’s The Fatal Conceit.

“The fatal conceit is the concept that central planning, with decision-making concentrated in a few hands, can never fully grasp the millions of complex individual interactions occurring simultaneously in the marketplace,” Paul told Fauci. “Only decentralised power and decision-making based on millions of individualised situations can arrive at what risks and behaviours each individual should choose. That’s what America was founded on, not a herd with a couple of people in Washington telling us what to do and we like sheep blindly follow.”

Paul sounded this theme throughout the pandemic, denouncing Fauci as a “petty tyrant” and “dictator in chief” who needlessly stoked fear to create a “nanny state” and “corral our freedom.” In the spring of 2020, when Fauci referred to the lockdowns as merely “inconvenient,” Paul lambasted him for ignoring the vast economic and social damage, and presciently warned, “Our reaction to the virus may turn out to be worse than the virus itself.”

At a hearing that summer, Paul summarised evidence from the U.S., Europe, and China that it was safe to open schools, and showed it to Fauci, with charts mounted on easels. “When are we going to tell people the truth – that it’s okay to take their kids back to school?” he asked. He couldn’t get a straight answer. While schools safely opened across Europe that fall, Fauci and the CDC kept finding reasons to keep American students out of the classroom (and placate teachers’ unions).

Over and over, at Senate hearings and in a stream of op-eds, Paul has offered more sensible policy prescriptions and better scientific guidance than Fauci, the CDC, or the media. While the Washington establishment relentlessly pushed mask mandates, Paul presented some of the abundant evidence that cloth and surgical masks were ineffective, telling Fauci, “You parade around in two masks for show.” While journalists and social-media platforms dismissed and censored suggestions that Covid had leaked out of a lab in Wuhan, Paul called out Fauci for working to suppress that legitimate discussion. He also showed that Fauci had been hiding his agency’s role in funding risky “gain-of-function” viral research at that lab. After Fauci denied that the National Institutes of Health had ever funded such research, Paul recited the damning evidence that it had done just that.

When Fauci plotted with Francis Collins, the NIH head, to plant “takedown” stories in the media depicting the authors of the Great Barrington Declaration as “fringe” scientists for daring to oppose lockdowns, journalists obediently went along with the campaign against these researchers from Oxford, Harvard, and Stanford. When Fauci declared that “attacks on me quite frankly are attacks on science”, journalists kept fawning – but Paul went after him.

Sen. Paul also skewered Fauci on his relentless pushing of vaccines to all age groups despite the frequent absence of good evidence they are safe, effective or worth the risk.

But Fauci and the CDC have kept urging that every American over six months old get vaccinated, and that everyone over five get an additional booster. While the press flacked for the administration’s policies – CNN enlisted Sesame Street’s Big Bird to entice toddlers to be jabbed – Paul performed the cost-benefit analysis shirked by Fauci and his journalist fan club. At a June hearing, Paul reminded Fauci of CDC data, initially hidden by the agency, showing that a booster shot did not reduce the rate of Covid hospitalisation or death among adults between 18 and 49.

“Are you aware of any studies,” he asked Fauci, “that show reduction in hospitalisation or death for children who take a booster?”

“Right now there’s not enough data that has been accumulated to indicate that that’s the case,” Fauci replied. Under Paul’s questioning, Fauci further conceded that the CDC had not even studied whether vaccination reduced the risk of serious disease in children with natural immunity – which includes practically all children, because the CDC’s seroprevalence surveys show that 86% of Americans under 18 have had a Covid infection. So, Paul continued, while there was no proof these children would benefit from the vaccine, the administration was urging them to get shots that had been repeatedly shown to increase the risk of myocarditis in young people.

“There are risks, and you’re telling everybody in America to blindly go out” and get vaccinated, Paul said. “That’s not science. That’s conjecture, and we should not be making public policy on it.”

Where are all the other brave, clear-sighted politicians who will fight the public health tyranny like Rand Paul?