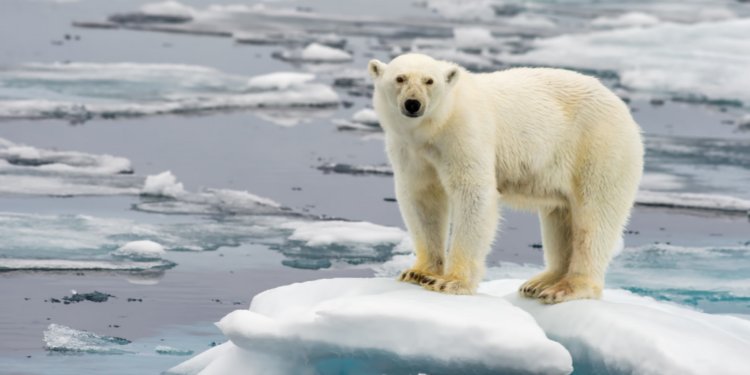 The archipelago of Svalbard in the Barents Sea has a distinct Arctic micro-climate. Located off the east coast of Greenland, and also known as Spitsbergen, it is fed by the warm, salty West Spitsbergen Current. As a result of this recent natural warming from the sea, Svalbard has increased its summer sea ice-free days by up to four times more than all other areas in the Arctic. Just the place for Sir David Attenborough and his team to turn up with their cameras as they seek to persuade us that polar bears are facing an existential threat to their existence. Less summer sea ice means less opportunity to hunt for seal food.

The distinguished polar bear scientist Dr. Susan Crockford notes that Svalbard is not representative of the Arctic in general. A 2016 paper by the ecologist Eric Regehr showed that the area around Svalbard was unusually warm compared to other locations. He produced the three graphs below to show this, and noted that the Barents Sea ice decline measured in increased ice-free days lost per year was six times higher than Hudson Bay, home of the most southerly sub-population of polar bears.

In 2020, two Polish oceanographers published the results of an investigation into recent increases in the temperature and salinity of the West Spitsbergen Current from 1997 to 2016. They found that over the two decades studied, the increase in the water temperature was associated with considerable changes in the salinity of the various water layers. The warmer waters and increased salt content are certain to have played a part in at least some of the higher levels of summer sea ice loss seen around the Barents Sea in recent years. Ocean currents are complex and are subject to a large number of influences. A long cycle of 70-80 years appears to be caused by the Atlantic Multidecadal Oscillation which pulses warm waters into the Arctic. Observations and measurements going back to the early 1800s suggest extensive waxing and waning of Arctic ice over a similar period.

The first episode of Frozen Planet II filmed the polar bears in Svalbard and warned that less summer sea ice is threatening their existence. This Sunday the programme returns to the area. The message from Attenborough is clear. As the Daily Sceptic noted in a recent article, he claimed that Arctic summer sea ice could all be gone by 2035. This improbable guess arose from a 2020 computer model, and it seems increasingly out of date. During the last decade, Arctic sea ice has started to make a small recovery. According to the latest data from the U.S.-based National Snow and Data Center, the sea ice extent at the end of August “is likely to remain higher than in recent years”. The EU Copernicus weather service has reported that coverage of sea ice is now very close to the 1991-2020 average.

Dr. Crockford reports that despite the recent loss of summer sea ice, Svalbard bears are thriving. The reason is clear. The ice in April and May, when the bears do most of their feeding, is “abundant”, and has not changed in recent years. She provides a recent sea ice area chart below to substantiate her claim.

According to Dr Crockford, the BBC/Attenborough agenda demands a certain message be told about climate change, and the people involved are “not about to let scientific facts get in their way”. She believes that the programme is calculated climate change propaganda marketed as entertainment.

Crockford notes the recent comments of Frozen Planet II Executive Producer Mark Brownlow: “Environmental storytelling is much more engrained in this series. We get the audience invested in our characters, which we then use to communicate the message,” he helpfully explained. Brownlow then stated that a sequence of young seal pups being blown off small ice floes in episode 1, “reveals the ‘difficult truth’ that storms are more frequent and the ice is thinning due to climate change”.

“You are emotionally engaged,” said Brownlow. Common reports that children are going to bed in tears and adults are flocking to climate change therapy sessions would seem to indicate Brownlow is onto something here. Is there any point in telling all the distressed folk what Dr Crockford thinks?

“Never mind that harp seal abundance across the Arctic is at an all-time high because numbers in the north west Atlantic are booming, or that a storm or low ice coverage at the wrong time of any year can cause high pup mortality,” she says.

The second episode of Frozen Planet II airs this Sunday on BBC at 8pm. Dr. Crockford has some viewing advice: “Buyer beware.”

Why the Mask Requirement Must Be Dropped From All Healthcare Settings