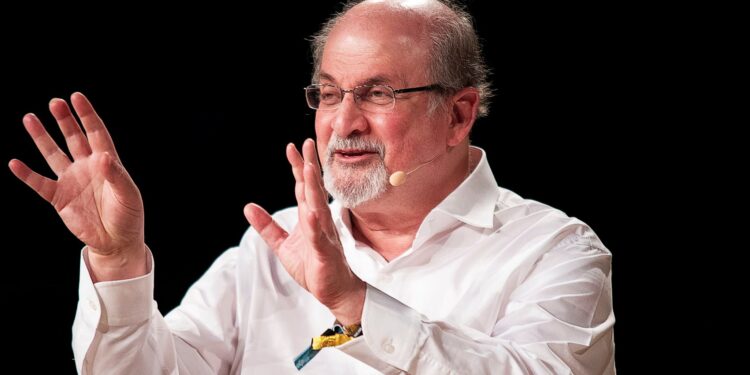 Salman Rushdie, author of The Satanic Verses, has been stabbed by an attacker who rushed the stage at an event in Chautauqua, about 55 miles southwest of Buffalo in a rural corner of New York. After The Satanic Verses was published in 1988, Iran’s late leader Ayatollah Ruhollah Khomeini issued a fatwa calling for Rushdie’s death and a semi-official Iranian religious foundation offered a bounty of $3 million for anyone who manages to murder him. Dailymail.com has more.

Author Salman Rushdie has been airlifted to hospital after being stabbed in the neck on stage ahead of a speech he was due to give in Chautauqua, near Buffalo.

The writer, 75, was attacked as he was being introduced to the stage for the CHQ 2022 event before giving a lecture on Friday morning.

He was attending for a discussion of the United States as asylum for writers and other artists in exile and as a home for freedom of creative expression.

Witnesses claimed that he managed to walk off stage with assistance and the attacker was restrained.

Blood appeared to be spattered on the wall behind where Rushdie had been attacked, with some also seen on a chair.

His current condition is not known, and a man has been arrested by New York police.

Rushdie’s London-based son Zafar, 42, is aware of the incident and his father has been seen being transported by air ambulance after the attack.

Hundreds of people in the audience gasped at the sight of the attack and were then evacuated.

A Chautauqua Institution spokesperson said: “We are dealing with an emergency situation. I can share no further details at this time.”

This is a disgraceful attack on freedom of expression – not just Mr Rushdie’s, but all of ours. The staff of the Daily Sceptic stand in solidarity with him.

You can see video footage of the immediate aftermath of the stabbing here.

If the Hallett Inquiry Says There Was No Alternative to Lockdown in Light of Neil Ferguson’s Apocalyptic Modelling, We’ll Know it’s a Whitewash