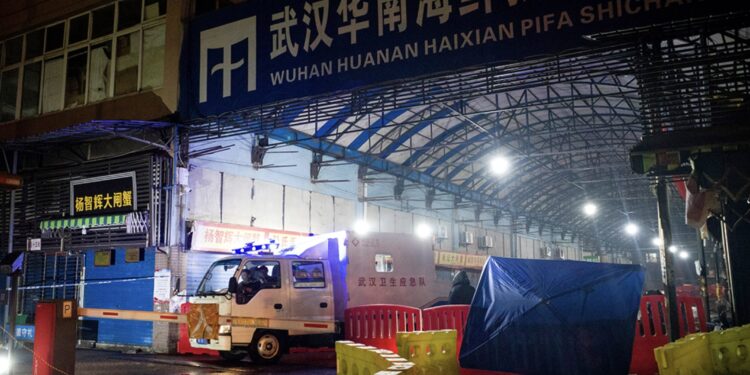 Has the lab leak been proven false? That’s the impression you’d get reading yesterday’s BBC article, which deals with two new studies on Covid origins.

The article quotes one scientist as saying, “We’re now as sure as we can be, based on the fragmentary evidence we do have, that this was a spillover event that happened in the market.” And it quotes another as saying the new studies would “correct the false record that the virus came from a lab”.

On Twitter, a third scientist claimed the studies provide “conclusive evidence that SARS-CoV-2 emerged via at least 2 zoonotic spillovers”. She went on to say that it’s now “100% clear the pandemic originated at Huanan market”, dismissing what she called “speculative bullshit about a lab leak”.

What exactly do the new studies show? The first analyses the spatial distribution of early cases, and finds that they were “geographically centred” on the Huanan Seafood Market. The second analyses the genomic diversity of early samples, and concludes the data are “best explained by at least two separate zoonotic transmissions”.

So is that case closed then? Not so fast.

According to critics, these papers don’t tell us anything we didn’t already know, which is that there was a superspreader event at the Huanan Seafood Market in December of 2019. And just because many of the early cases were detected there, doesn’t mean that is where the virus originated.

As a matter of fact, the studies were published as preprints back in February, and since then their language has been watered-down considerably (notwithstanding the quotations above, which were not taken from the papers themselves).

For example, the preprint version of the first study claimed that it found “dispositive evidence for the emergence of SARS-Cov-2 via the live wildlife trade”. Yet the latest version admits there is “insufficient evidence to define upstream events, and exact circumstances remain obscure”.

In my recent interview with Matt Ridley (co-author of Viral: The Search for the Origin of COVID-19) I asked him about the preprint versions of the studies, which had previously been covered by the New York Times. Here’s what he said about the first:

It shows significant errors of data handling (having extracted location information from a low-resolution analogue plan with errors in it) and having ignored blatant problems with “ascertainment bias”. That is to say, the reason that many early cases were connected to the market was partly because the diagnostic criteria for covid in the early days included whether the person had been to the market: a circular argument.

And he added the following:

A preprint from the head of Beijing’s Centers for Disease Control came to the opposite conclusion: that the market was a place where the outbreak was amplified, but not where it started. Since then a new peer reviewed paper has just been published by Virginie Courtier and Francisco Ribera, which also comes to this conclusion: the pattern of positive samples in the market (from counter-tops, sewage etc) does not suggest any one stall was central to the outbreak and all samples but one are of a single strain of the virus.

Ridley’s co-author, Alina Chan, has written a short article with her own comments on the new studies. And unsurprisingly, she’s not convinced. Chan notes that even after peer review, the first study “fails to acknowledge that early Covid-19 cases had been identified with ascertainment bias”.

In short, both the lab leak and natural spillover theories are still in play. And personally, I’d sceptical of any scientist who dismissed a perfectly reasonable theory as “speculative bullshit” – it suggests she’s not treating the data dispassionately.

Stop Press: Former CDC Director at the time of COVID-19’s emergence Robert Redfield has rejected Anthony Fauci’s claims that it’s more likely COVID-19 originated naturally. He told Fox News he still suspects COVID-19 emerged “from the laboratory” and “had to be educated in the laboratory to gain the efficient human-to-human transmission capability that it has.” According to Redfield, “There’s very little evidence, if you really want to be critical” to support the natural spillover theory.