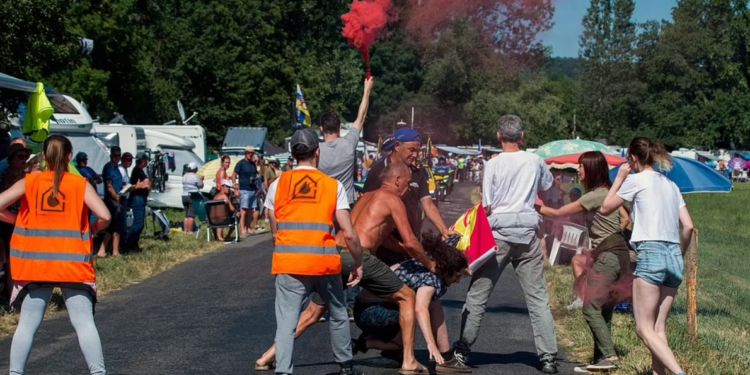 Tour de France fans took matters into their own hands on Saturday as they removed a gang of eco-protesters threatening to disrupt the bicycle race by sitting in the middle of the road to block riders. MailOnline has more.

Eight climate activists from French campaign group Dernière Rénovation (Last Renovation) sporting T-shirts emblazoned with the message “we have 978 days left” to tackle environmental decline tried to stop the race during the 20th stage between Lacapelle-Marival and Rocamadouron on Saturday.

But their attempts to wreak havoc at the stage were thwarted by spectators, who stormed onto the road and dragged them out of the path of the oncoming bikes even before the police arrived on the scene to make arrests.

Striking pictures have emerged of the enraged fans bowling into the road to pull, push and harry the protesters off the tarmac to prevent them from ruining the race.

Started earlier this year, Dernière Rénovation (DR) is a French faction of the international climate activism conglomerate “A22”, which includes the likes of Just Stop Oil – a U.K.-based group which attempted to disrupt the British Formula 1 Grand Prix at Silverstone on July 3rd.

DR employ similar tactics to those used by the likes of Just Stop Oil and Insulate Britain, such as gluing themselves to the road to create congestion in large cities or putting themselves in harm’s way to disrupt major events.

The French faction had already hit the cycling competition three times prior to yesterday’s demonstration, and have promised more action – though the Tour De France draws to a close today on the Champs-Élysées in Paris.

A statement released by the group today read: “Citizens supporting DR tried to interrupt the Tour de France time trial, during the 20th stage between Lacapelle-Marival and Rocamadour. Today’s action is the fourth in a series of disruptive actions that will continue until there is a credible and effective government commitment to isolate buildings… If nothing is done, the climate crisis will devastate entire swaths of our planet, as its disastrous consequences in our country have already witnessed this summer, and will condemn billions of people to death.”

Meanwhile, people are asking why the British police can’t respond more like the Italians when eco-protestors target famous artworks. While the protestors who glued their hands to John Constable’s The Hay Wain in the National Gallery in London earlier this month were left alone until police arrested them over an hour later, at the Uffizi Gallery in Florence this week a security guard ripped two protestors’ hands from Botticelli’s Primavera where they had been superglued within minutes and dragged them away.

Good to see some spirited pushback against the disruptive eco-loons.