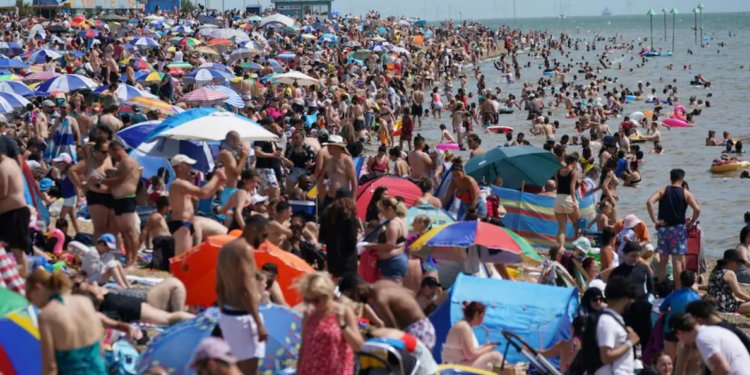 Trains across the country have been cancelled or put on go-slow orders, schools and medical facilities have closed and people are being told to consider staying at home in the heatwave “crisis” for which the Government has issued a “red severe weather warning”, but which most of us just call summer. Here’s the Telegraph.

Blanket speed restrictions will be imposed on all railway lines, with both the train operators and Highways England warning people not to travel.

The Met Office said that “in general” it would be safer for people to stay indoors if possible.

Some GP surgeries and operating theatres have already closed as hospital bosses warned that the extreme weather made it hard to keep services running. Job centres in areas covered by the red severe weather warning will also be shut.

Schools in several counties, including Nottinghamshire and Hampshire, confirmed that they would close for two days following the health alerts. Others have reduced hours amid Met Office warnings that temperatures will soar to highs of 38C and 40C in some areas.

The UK’s first red extreme heat warning covers a large swathe of England from London to Manchester and York for both Monday and Tuesday and the UK Health Security Agency issued a heat health warning at level four, which is described as a “national emergency”.

Tracy Nicholls, the chief executive of the College of Paramedics, warned that the “ferocious heat” could kill people.

But Dominic Raab, the deputy prime minister, said the country should be resilient enough to withstand the pressures brought by the heat and urged people to “enjoy the sunshine” as long as they take “common sense” precautions.

David Davis, a senior Tory backbencher, said: “Obviously, if you’re at risk, if you’re a young child or elderly or you have some other condition, take care and obviously use hats and sunscreen and use the shade. But people exist in Mediterranean climes and handle it. So, if we use common sense we can do the same.”

Another senior Tory MP said he thought the public health messaging was “grossly inflated and scaremongering of the worst kind”.

I note that the forecast already seems to have been lowered to 38°C.

At the Daily Sceptic we want to put the forecasts to the test and invite any readers who have an outdoor thermometer (in the shade) to send in the temperature readings throughout the afternoon (and then again tomorrow). You can either put them in the comments below or email us here. If you know what the forecast was for your area then mention that as well so it’ll be easy to compare. Don’t forget to include your location. If you don’t have a thermometer you could use the current reading (not the forecast) from your phone weather app (mine currently, at 2:30pm in Warwickshire, says 37°C; the forecast yesterday was 39°C), though if it’s from an app rather than a thermometer do mention that.

We’ll see how close it really gets across the country to the 40-plus degrees predicted.

Some replies by email: