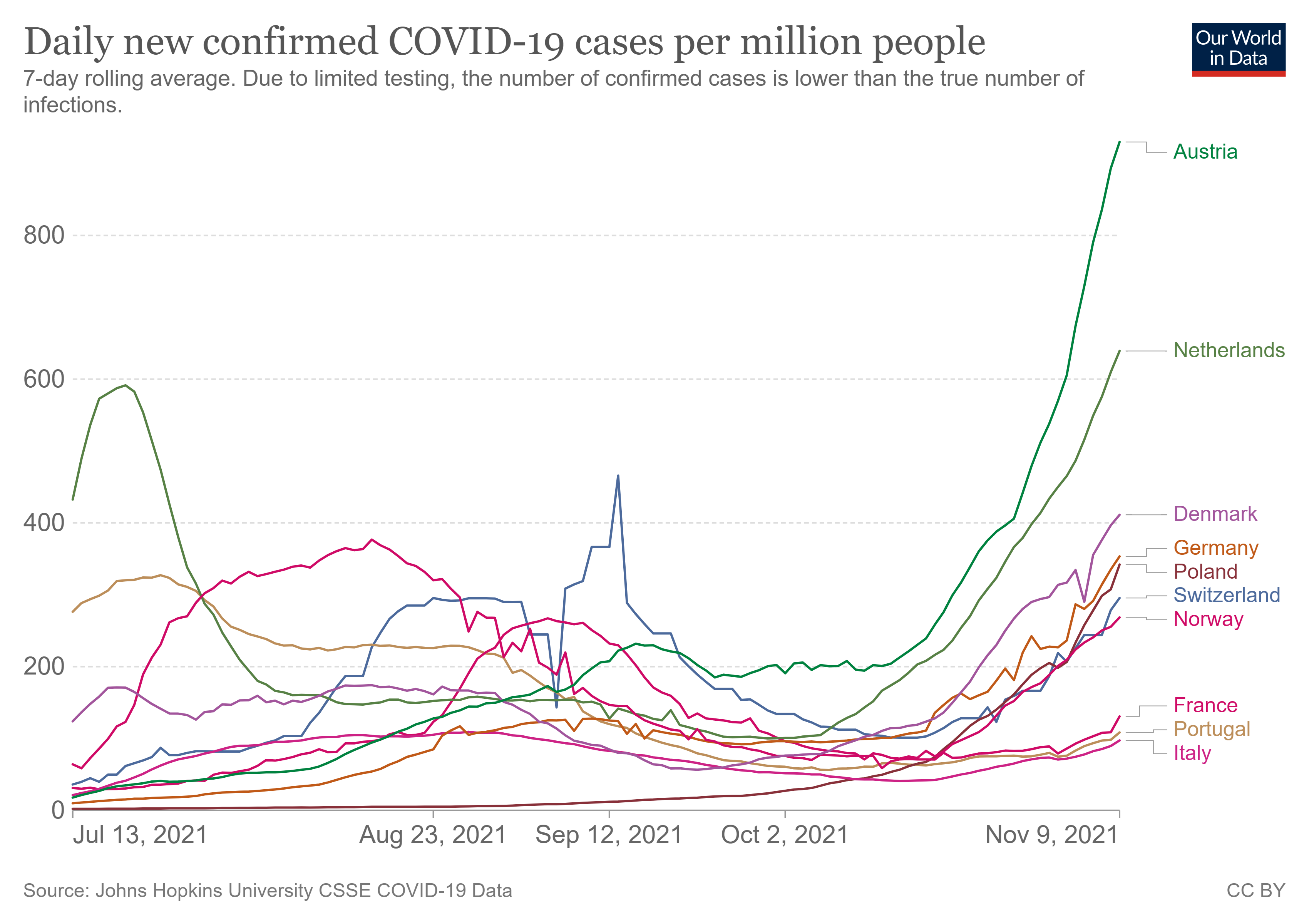 A late autumn surge in reported Covid infections is underway in Europe, with spikes in Austria, Netherlands, Denmark, Germany, Switzerland and Norway, and the possible beginnings of one in France, Portugal and Italy. This is despite high vaccine coverage and the heavy use of vaccine passports in most of these countries including Germany, Netherlands, Austria, Switzerland, Italy and France.

Some of this is at least partly a result of ramping up testing, especially in Austria and Denmark.

Denmark’s positive test rate is currently flat (see below). This is despite the country declaring the pandemic over and abandoning vaccine passports in September. However, due to the climbing reported infection rate, the country’s Parliament is now said to be preparing to return to a state of emergency and reactivate the vaccine pass scheme, despite the rise being so far largely an artefact of increased testing.

Elsewhere, however, the positive rate is also rising, suggesting real Covid and not just a testing artefact.

Most of these places already had a summer Delta surge of varying sizes, and there is no new variant being reported, so this appears to be primarily seasonal, and is still all Delta.

Will it dip again before winter, like it did in many countries last year, and has already in the U.K? December is usually the peak month for winter flu-like illness, so we will be following it closely.

In the U.K., it’s worth noting that in the five-year (2015-19) average of deaths there is a mini-bump in October that declines slightly at the start of November, just as there is this year and there was last year (see circled areas of graph below).

However, in the five-year average, deaths then rise again in mid-November, before spiking at the turn of the year, and Covid deaths followed a similar pattern last year. Will it repeat the pattern this year? If it does we should expect infections and then deaths to begin rising soon, gently at first and then surging in December. It’s hard to see why this year should be different, save for the immunity we have built up over the past two years. How much difference will that make? Will the vaccinated continue to experience suppressed death rates compared to the unvaccinated, or will time and winter change that?

Whatever turns out to be the case, the NHS has no excuse not to be ready this year, so there can be no justification for renewed restrictions.