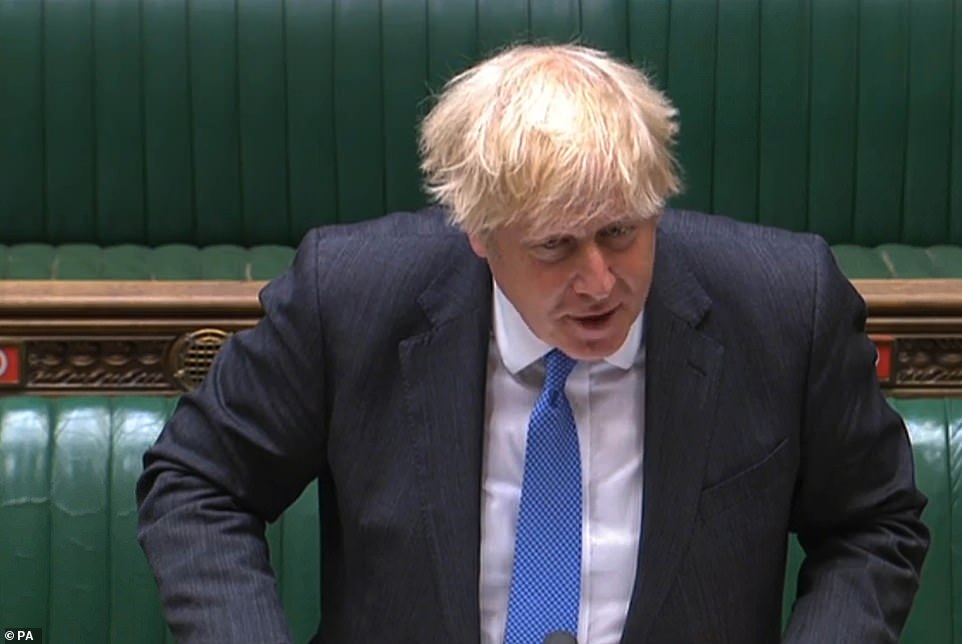 In a House of Commons vote this evening, 60 MPs voted against the extension of the restrictions, the largest rebellion Boris has faced yet in connection with his lockdown policies – although not enough to defeat the Government, thanks to the support of Labour MPs. MailOnline has more.

MPs have approved the extension of coronavirus restrictions in England until July 19th – but dozens of furious Tories rebelled amid demands that Boris Johnson must not “shift the goalposts” and delay Freedom Day yet again.

The Prime Minister was spared a defeat as Labour backed plans for a four-week delay to the end of lockdown measures, with MPs voting 461 to 60, a majority of 401, to approve regulations delaying the easing of the measures.

For now, limits on numbers for sports events, theatres and cinemas will remain in place, nightclubs will stay shuttered and people will be asked to continue working from home where possible.

But MPs had lined up to grill Matt Hancock in the House as he opened the debate on regulations that formally extended the lockdown into next month.

The Health Secretary defended pushing the date back, arguing the Indian – or Delta – variant has “given the virus extra legs” and stressing that July 19th should be the “terminus” for the restrictions.

Former chief whip Mark Harper voiced scepticism that the latest promise will be kept, asking whether “we are going to get to this point in four weeks’ time and what we are going to be back here again”.

And another ex-minister, Steve Baker complained about the two-week review of the change saying it only “deepens despair” if the Government “creates hope and shifts the goalposts”.

Mr Davies questioned why the Prime Minister was not trusting the “the common sense of the British people and his Conservative instincts of individual freedom and individual responsibility” rather than the advice of the Scientific Advisory Group for Emergencies (Sage).

Mr Johnson insisted he did not want to see Covid restrictions last forever but “a little more time” was needed to vaccinate millions more people to help combat the spread of the Delta variant.

Mr Wragg asked: “When can we expect the co-ordinated chorus of Sage members recommencing their media appearances to depress morale?”

Mr Johnson replied: “I believe that academic and scientific freedom are an invaluable part of our country and I also note that my scientific colleagues would echo my sentiments that we need to learn to live with Covid.”

Stop Press: You can see a list of the MPs who voted ‘No’ here. The naysayers were comprised of 49 Conservative MPs, six Labour MPs and and five Democratic Unionists. The tellers for the Noes were Steve Baker MP and Jackie Doyle-Price MP.

News from the Free State of Florida