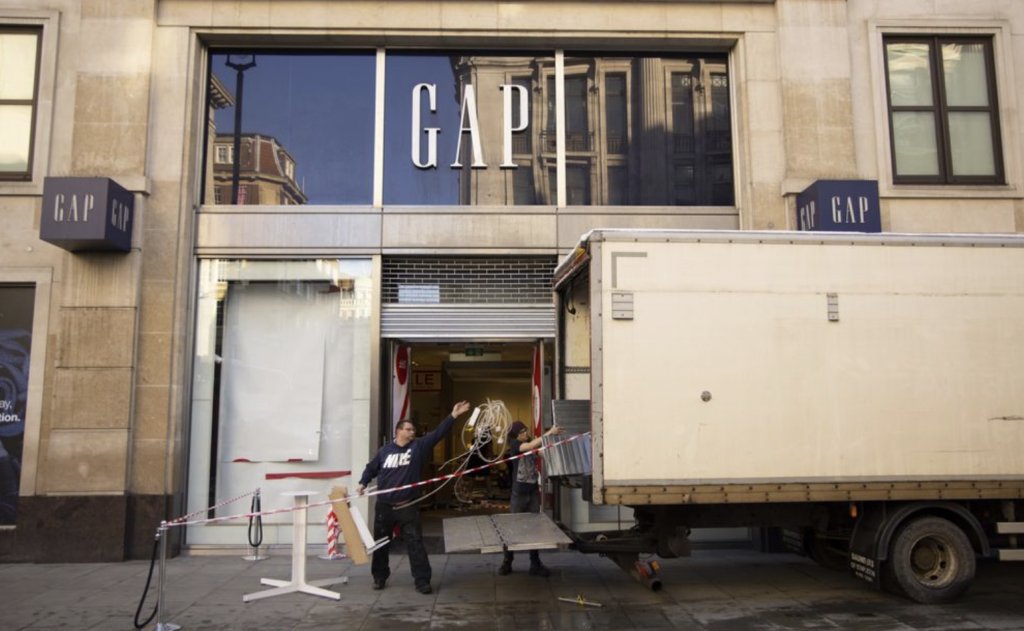 Following 15 months of draconian lockdown restrictions, Gap has announced the closure of all its 81 stores in the U.K. and Ireland, with an estimated loss of over 1,000 jobs. The U.S. clothing retailer is also considering reducing store numbers in both France and Italy and blames “market dynamics” for massive losses last year. MailOnline has the story.

Phased closures will start in August and continue through to September, the U.S. chain revealed.

It comes after a year of coronavirus lockdowns battering the U.K. high street, with other popular chains including TopShop going under. …

[Gap said in a statement]: “In the United Kingdom and Europe, we are going to maintain our Gap online business.

“The e-commerce business continues to grow and we want to meet our customers where they are shopping. We’re becoming a digital-first business and we’re looking for a partner to help drive our online business.

“We are thoughtfully moving through the consultation process with our European team, and we will provide support and transition assistance for our colleagues as we look to wind down stores.” …

Founded in 1969 and headquartered in San Francisco, the firm has struggled in recent years and like most retailers saw store footfall slump during the pandemic. …

It comes just months after high street giant Debenhams confirmed the last of its stores would close for the final time.

The department store launched a post-lockdown fire sale before the chain shuttered its stores, marking the end of a 242-year presence in Britain’s towns and cities.

The outlook for Britain’s high street is dire. More than 11,000 outlets permanently closed in 2020 and the Local Data Company expects that this will be followed by 18,000 more closures in 2021. 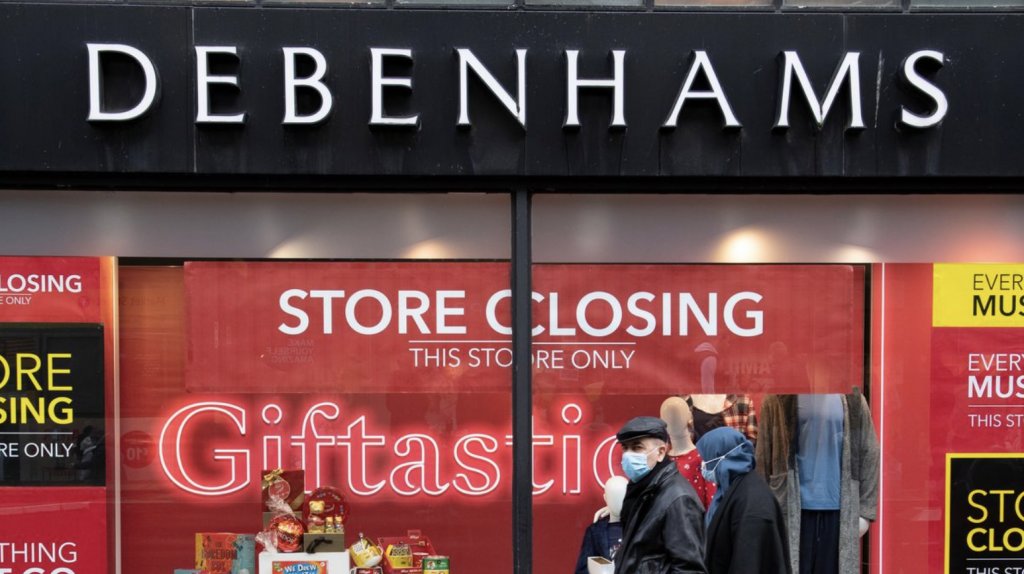 Debenhams will close the doors of its remaining U.K. stores for the final time this weekend because of lockdown, bringing more than 240 years of retail history to an end. Sky News has the story.

The department store chain, a staple of high streets since 1778, will close its remaining 28 stores for good on Saturday after the company collapsed amid the fallout of the Covid pandemic.

It closed 21 of its sites across the U.K. for the final time on Thursday.

The retailer was already struggling before the coronavirus outbreak, as shoppers moved away from traditional department store models and moved online.

But it could not cope with the enforced closure of sites during lockdown and quickly went into administration within weeks of the virus fully hitting the U.K..

The company, which began life as a high end draper in London’s West End, started its liquidation process at the start of this year after failing to secure a rescue sale.

Debenhams employed more than 20,000 people before lockdown struck. The closure of its stores is just the tip of the iceberg for the high street. Over 11,000 retail outlets permanently closed in 2020, and the Local Data Company expects this will be followed by 18,000 more closures in 2021.

Stop Press: Arthur Beale, a 500 year-old yacht chandler in London, has closed its doors for the last time. The Wall St Journal has the story. 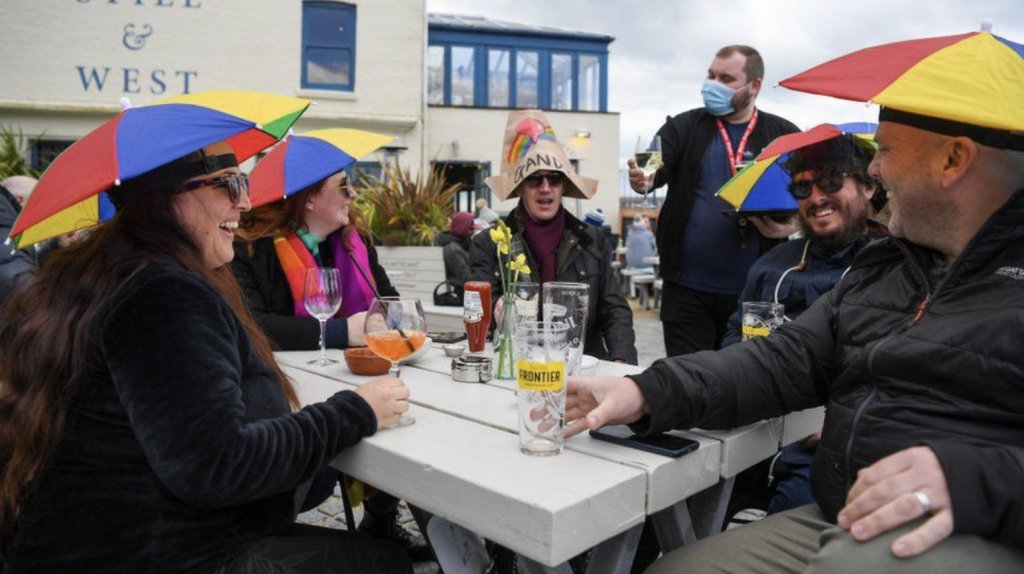 Finally, some good news for pubs! The unpredictable weather has not stopped Brits from visiting shops and pubs this afternoon, as the Government’s lockdown was partially eased. BBC News has the story.

For the first time in months, pub gardens, shops and hairdressers have reopened in England, as rules were also eased in the rest of the UK.

Shoppers flocked to the High Street, with long queues seen outside some retailers. Other people took advantage of England’s gyms and zoos reopening.

Northern Ireland’s “stay-at-home” order is ending and some rules are being eased in Scotland and Wales.

The PM had planned to have a celebratory pint to mark the measures easing, but that has been postponed following the death of the Duke of Edinburgh on Friday. …

Scott Westlake, landlord of the Myrtle Tavern in Leeds, said the pub had received 5,000 bookings over the next month for his new outside eating and drinking area.

Mr Westlake said: “If the weather’s good, I think most people are optimistic and excited.

“Atmosphere, ambience, seeing your mates, I think they (customers) are looking forward to that more than anything – and they’ll sit in a blizzard for the first few days at least.”

Nicholas Hair, landlord and owner of the Kentish Belle pub in Bexleyheath, south-east London, said there was a “sense of celebration” in the early hours of Monday as it opened to midnight customers.

“I’m hoping that this is a sort of rebirth, and that we are reopen for the foreseeable,” he said.

It’s not been smooth sailing for all pubs, however. A pub in Coventry is currently being investigated by the local council because hundreds of people queued outside before it opened at midnight. BBC News reports:

Darren Lee, owner of the Oak Inn, said 260 customers were seated in groups of up to six at its outside tables – but 300 to 400 people were turned away.

He said crowds at the Gosford Street pub were “very well behaved” and police were satisfied with the situation.

However, Coventry City Council said it was investigating to see whether it followed rules.

BBC News’ report on the reopening of the hospitality industry is worth reading in full.

Stop Press: Tesco has urged people to go to the pub, given how tough it has been for the hospitality industry over the past year.