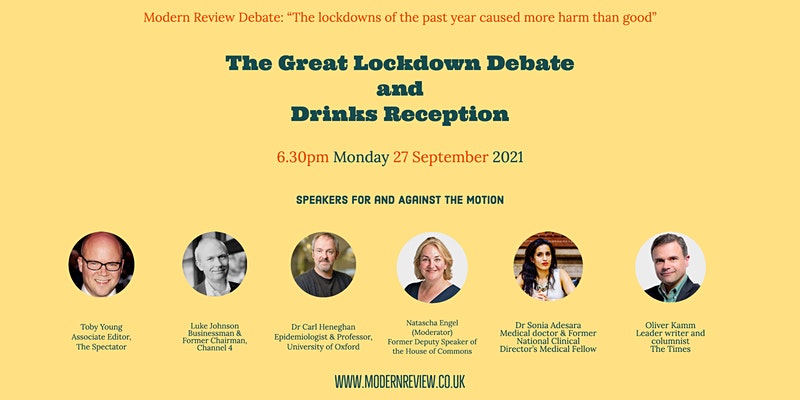 On September 27th please join me at the Great Lockdown Debate and Drinks Reception being organised by Modern Review, a new international magazine being launched early next year.

The motion is “Lockdowns of the past year caused more harm than good” and arguing for it alongside me will be Professor Carl Heneghan, Director of Evidence-Based Medicine at Oxford University, and Luke Johnson, businessman, entrepreneur and the former Chairman of Channel 4. Speakers on the opposing side will include Oliver Kamm, a Times leader writer, and Dr. Sonia Adesara, a medical doctor and former director of 50:50 Parliament. The debate will be moderated by former House of Commons Deputy Speaker Natascha Engel.

The venue is The London, a brand new super-luxury hotel just off Leicester Square. The evening will begin with a drinks reception at 6.30pm and the debate will start at 7pm. Tickets are £30, but the organisers have created a special offer for Daily Sceptic readers whereby you can get a 10% discount by going to this webpage. 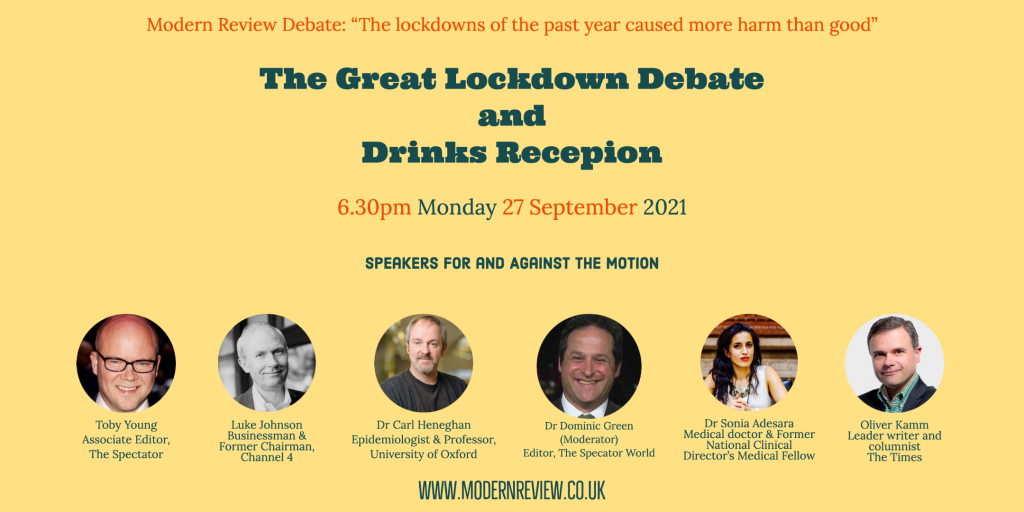 Below is a guest post by one of the editors of the Modern Review, a new Indian-backed but British-based cultural and political magazine that will be launching this autumn. To mark the launch, the editors have organised a lockdown debate in which I’ll be participating, alongside Professor Carl Heneghan and Luke Johnson.

If the eruption of Covid united us in common grief and shared suffering, the Government’s response to it – often characterised by improvisation and incompetence – has divided us. Many are grateful that the lockdowns saved lives; others complain that they destroyed livelihoods. The hospitality sector suffered the worst job losses in history, and the travel and tourism industries stand devastated. Many among us reconciled themselves to the lockdowns as an unavoidable necessity; others have come to see in their prolongation the seeds of authoritarian governmental control.

Wherever you stand, the ramifications of the lockdowns extend beyond health and safety: they will shape our economics, politics, and ways of life for at least the next decade. Or will they?

Join us at what promises to be an edifying and entertaining event. Bringing together individuals who are credentialled and contentious, it will be a no-holds-barred debate. There will be no shying away from discomfiting facts, no suppression of fiery opinions. And best of all: you can have your say with a vote at the end.

The event will be held at The Londoner, the capital’s newest luxury hotel in the heart of the West End. It will open with a drinks reception at 6.30pm, followed by the main event at 7pm.

Tickets are £30 and can be obtained here.

Debaters include, among others:

Dr. Carl Heneghan
Epidemiologist and Director of the Centre for Evidence-Based Medicine, University of Oxford