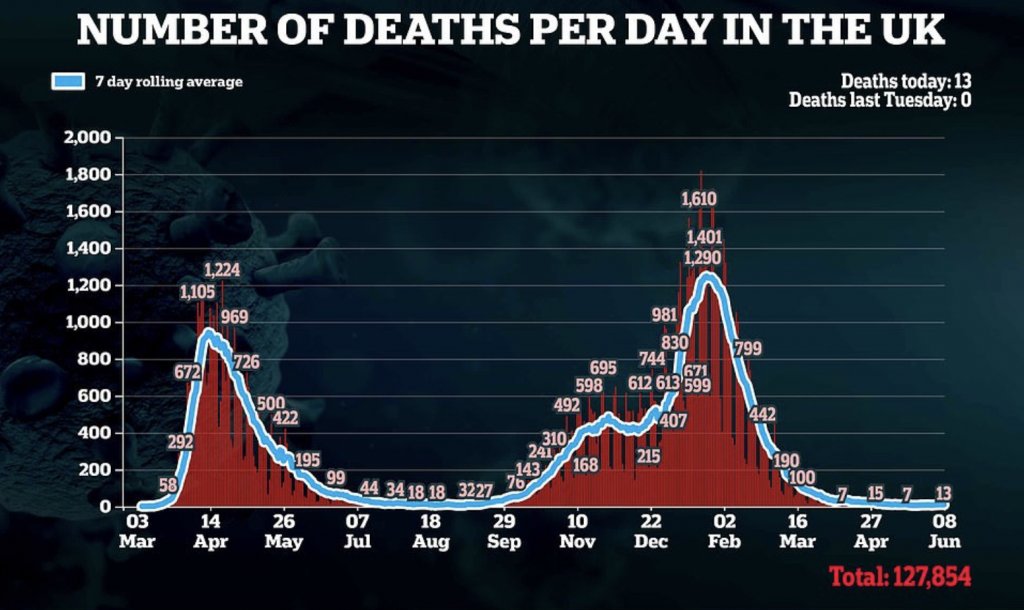 The vaccine has broken the link between positive Covid tests and Covid deaths, according to the Chief Executive of NHS Providers, Chris Hopson, who last week criticised the scientific modelling seen by the Government through much of the pandemic as “crude” and unreliable. Chris says that viewed alone, the raw number of positive tests does not tell the full story: “It is a much younger population that is coming in [for hospital treatment now], they are less clinically vulnerable” and much easier to treat. The MailOnline has the story.

Chris Hopson… said today that the surge in cases and hospital admissions in the Greater Manchester town was manageable for its hospitals.

Patients were generally younger and less sick, he suggested, than in the crippling second wave over the winter, and the numbers of people coming in were lower and significantly fewer of them are dying.

Vaccines appear to be doing a lot of the heavy lifting, Mr Hopson said, adding that they have broken the link between infections and “very high” levels of hospital admissions and deaths in earlier waves of the virus…

Bolton has been overtaken by nearby Blackburn as the country’s Covid hotspot after cases surged there driven by the Indian variant, which accounts for almost all infections in the town. Hospital admissions rose shortly after, to a peak of 49 people on wards with Covid and 14 admitted in a day, but these appear to be falling now, too, with 42 reported in patients on June 1st.

Mr Hopson said: “If – and it is a big if – if Bolton has gone through its complete cycle and if other areas follow Bolton, the view from the hospital there was that they were able to cope with the level of infections.”

His comments come as pressure is building towards Boris Johnson’s speech next Monday when he is expected reveal whether June 21st’s “Freedom Day” end of social distancing will go ahead. Current trends look as though he will prolong lockdown laws for a few more weeks or until the summer holidays to buy more time for vaccinations.

Mr Hopson told Times Radio: “It’s important not to just focus on the raw numbers here… you also do need to look at who’s being admitted into hospital and how clinically vulnerable and what level of acuity [illness] they’ve got.

“What chief executives are consistently telling us is that it is a much younger population that is coming in, they are less clinically vulnerable, they are less in need of critical care and therefore they’re seeing what they believe is a significantly lower mortality rate which is, you know, borne out by the figures.

“So it’s not just the numbers of people who are coming in, it’s actually the level of harm and clinical risk.” 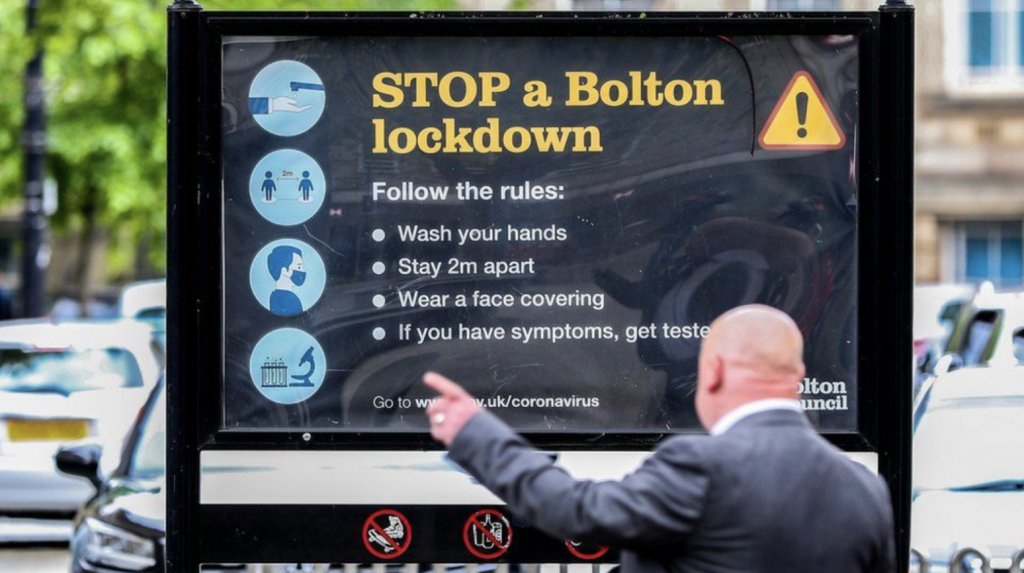 The number of people being admitted to hospital to be treated for Covid continues to fall in the former Indian Delta variant “hotspot” Bolton. The MailOnline has the story.

[The] latest NHS figures show there were 42 people in hospital in the Royal Bolton Hospital with the virus on June 1st, last Tuesday, down from 49 at the peak of the new variant scare a week earlier.

The number of people being admitted to hospital each day has tumbled, too, to just three on May 30 compared to 14 five days before. The numbers are trailing a decline in cases which appears to show a spike in new variant cases has come under control.

The same pattern is hopefully beginning to unfold in neighbouring Blackburn, the U.K.’s current hotspot which has also been hit by the Indian “Delta” strain, where infection numbers among over-60s have started to fall following a rise.

Although the borough’s infection rate was still rising at the end of May, a decline in infections among older people should help officials to keep hospital admissions and deaths under control.

More than 12,000 cases of the B.1.617.2 variant have been spotted so far in the U.K. and Public Health England last week admitted for the first time that it has become the most common variant in Britain. Almost one in five officially recorded cases – 2,149 – have been in Bolton, with another 724 in Blackburn with Darwen.

But the fact that Bolton has turned the tide of the super-infectious strain suggests it can be successfully controlled without lockdowns, instead using testing, contact tracing and vaccinations.

Cases have been most common in under-55s, who are least likely to have had two doses of a vaccine, but hospital admissions rose in the wake of the rocketing cases. Only a small fraction of patients had been fully vaccinated.

Health Secretary Matt Hancock last week admitted the link between infections and hospital admissions, which vaccines should separate, has so far been “broken but not completely severed”.

Stop Press: According to the Prime Minister’s spokesman, quoted in the Guardian, “[it] still remains that there is nothing in the data currently to suggest step four [of the lockdown roadmap] can’t go ahead at the earliest date”.

But we do need to look very closely at the data over this coming week, which will be crucial to decide and really to get a sense of the data, particularly on hospitalisations and whether or not the excellent vaccine rollout programme has sufficiently severed that link between the increase in cases, which we always expected to happen, particularly after step three, and that subsequently leading to hospitalisations and deaths. 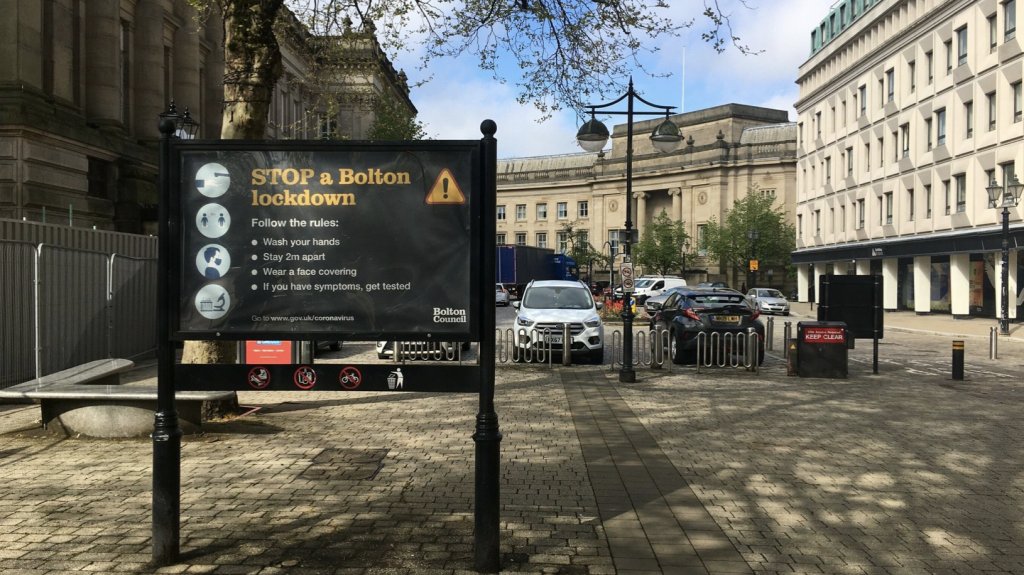 Ministers met on Tuesday to discuss emergency plans that could see local lockdown restrictions being imposed in Indian Covid variant “hotspots”, with Boris Johnson saying that things will be clearer in “days“. But the Leader of Bolton Council has warned that there is a “danger of unrest” if local restrictions are used in the area. Sky News has the story.

David Greenhalgh, a Conservative and head of the local authority, said that previous implementations of the coronavirus measures were ineffective in the region.

Speaking to the BBC’s Today programme, Mr Greenhalgh was asked if it was true he had warned Health Secretary Matt Hancock about civil unrest in the event of local Covid restrictions.

The councillor said: “I do think there is a danger of unrest.

“There was a great deal of resentment. Bolton was… disproportionately affected, really since July last year, and even when our rates were coming down, we still remained in lockdown when other areas rates were higher than ours.”

Bolton is currently one of the hotspots of the Indian variant of the coronavirus.

Cases have doubled in the last week, and 19 people are in hospital, according to Mr Hancock.

Mr Greenhalgh added: “We are putting all the measures in that we can at the moment. We have community spread, there’s no doubt about that, and we’re holding back a variant that would appear – although the evidence is still being gathered – to be a little bit more transmissible, easily transmissible.

“The majority of our cases are in very much our younger age groups – primary school, secondary school and in their 20s.

“We still haven’t got an increase in hospitalisation and severe illness, which is hugely welcome, those figures still remain low.”

As Will Jones highlighted in an earlier post, the number of Covid cases in Bolton – as well as in Blackburn with Darwen, another Indian variant hotspot – already seems to be flattening.