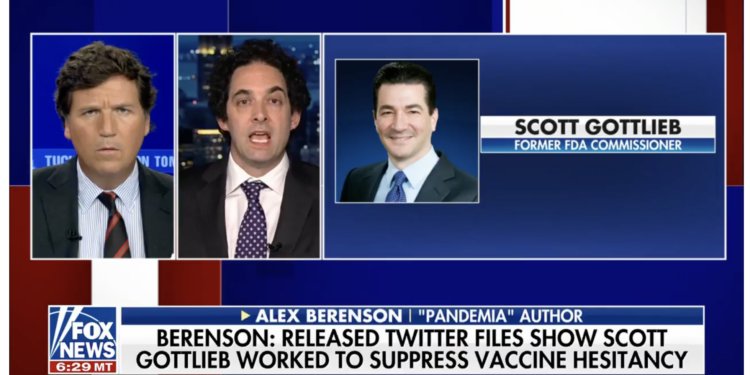 In the latest Twitter Files, Alex Berenson reveals that Pfizer board member and former FDA head Scott Gottlieb used his influence to pressure Twitter to flag a tweet that cast doubt on the efficacy of the COVID-19 vaccines. DailyMail.Com has more.

The tweet – made by a former Government health official – was subsequently slapped with a ‘Misleading’ label, despite the debate around immunity still dividing scientists to this day. …

The tweet was posted by Dr. Brett Giroir, another government health official under the Trump administration, and touted the superiority of natural immunity over vaccine-conferred immunity.

Dr. Gottlieb, who currently has a Twitter following of about 550,000, lobbied for the Tweet to be flagged as misinformation.

Dr. Gottlieb said in the email the language could prove ‘corrosive’ to the nationwide Covid vaccination campaign.

And even though Twitter could not prove outright that the tweet was a violation of its misinformation policy, it was slapped with a ‘Misleading’ label anyway.

Net Zero Will Lead to the End of Modern Civilisation, Says Top Scientist

Excess Mortality Before and After Vaccinating the Elderly