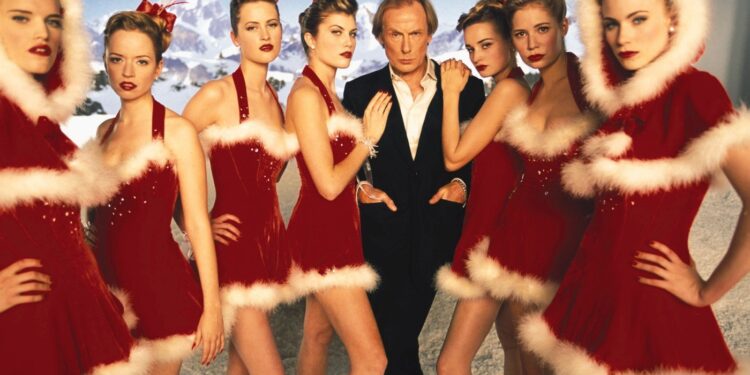 Perhaps a touch late, but here are my highlights of the past year, as we enter a new one that is hopefully even more progressive and diverse AF.

Our brave stand in Qatar

While other football teams stood up to Qatar by standing up, England did it by kneeling down, thus outdoing all the lazy teams who don’t care about social justice.

Gary Neville proved the best way to criticise a tyrannical foreign regime is by taking money from it. This shows you really mean it, because you risk losing your fee. That’s why it’s best to start the criticism after the bank transfer has gone through. Get your PA to check, then once those digits hit your account, start mouthing off immediately.

Our apology for Love Actually

Richard Curtis bravely apologised for his highly popular film, and its appalling lack of diversity. When the movie was released in 2003, Curtis was embarrassingly unaware of the safe political standpoints of 2022. Thus he packed his film with a repellent albino race, known at the time as ‘white people’. Luckily this obscure ethnic group, whose primitive societies were characterised by fascism and sunburn, died out around 2010.

Watching the movie now feels roughly the same as sitting through a four hour Holocaust documentary. A necessary reminder of what must never happen again. The philosopher Jeremy Vine did great work in 2022 condemning this vile propaganda to the dustbin of history.

The anointing of Queen Greta

In 2022 we officially recognised Greta Thunberg as Queen and Ruler of the Western Territories. Although we all loved Her Majesty already, she did not officially become Queen until her father logged into her Twitter account and made a penis joke at the expense of a former kickboxer.

Europe has, of course, now been renamed Saint Gretasburg, and Christmas has been replaced with ‘Greta Totally Owning Tate With Her Dick Joke’ day, more simply known as ‘GOTDJD’.

Harry and Meghan stole our hearts

I hardly need to tell readers, but 2022 was the year Harry and Meghan made us fall in love with them all over again, with their brilliant Netflix documentary, My Family Are Mean.

Until this year, Britain, and indeed the world, had loved our royal family, particularly the late Queen Elizabeth II. But with the release of MFAM (as it became known to cool people) our affection shifted violently towards the ginger prince and his beautiful diverse owner, Meghan.

So strong was our love for the couple, that the once popular television presenter Jeremy Clarkson was brutally condemned for writing a disgusting piece of serious journalism about the enchanting Meghan. Ironically, after calling for our beloved Duchess to suffer a medieval punishment, it was Clarkson who was stretched on a rack for several days in the public square, until he finally recanted by uttering the words, “Ok, she was quite hot in Suits.”

At this point, Clarkson was allowed down from the torture device, but later died anyway due to his new-found extreme love of our great Duchess. Sad, but what a way to go! We are totes jealous, Jezza.

This might seem strange to include in a list of best moments, but 2022 was the year we finally identified the Devil in his human form. ‘Elon Musk’ bought the popular social media app, Twitter, and in doing so exposed himself as the dark prince of evil.

He began his reign of terror by immediately reinstating various depraved people who believe in cruel, archaic practices like free speech and claiming that women exist.

While this ‘best moment’ is not a wholly good thing, in that Satan himself is now in charge of an influential online platform, at least we know who and what we are dealing with. In 2023, we have a good chance of destroying the Prince of Darkness by getting the EU to pass some new laws protecting us all from his deadly memes.

Though the outbreak of war in Europe is arguably not a positive, 2022 was the year we discovered the bravest man to have ever lived, our hero Volodymyr Zelenskyyy.

Zelenskyyyy proved himself the most capable military leader of all time when it came to asking for large sums of money. Also, as my female friends never tire of telling me, he made the swamp green woolly jumper sexy again.

I probably shouldn’t say this, but part of me wants the war to continue as long as possible just so I can see more of this rugged new hero. It’s a toss-up between Prince Harry and Zelenskyyyyy for most eligible man of 2022. Or it would be if they weren’t both already married, dammit!

Speaking of war, a clear highlight of 2022 was the Biden administration bravely rescuing basketball player and criminal Brittney Griner, in exchange for a minor Russian arms dealer known as the ‘Merchant of Death’.

War has changed. Modern conflicts are not resolved by having a fleet of more than 60 cargo aircraft packed with weapons, or training entire armies of children to kill. No, they are won by refusing to stand for the national anthem and throwing an orange ball around while being a lesbian.

The fact that Biden recognised this is why he is the shrewdest president of all time.

With a bit of luck this will be the year we finally eradicate the human race completely and save the planet. And if that happens, I for one can’t wait to write about it!