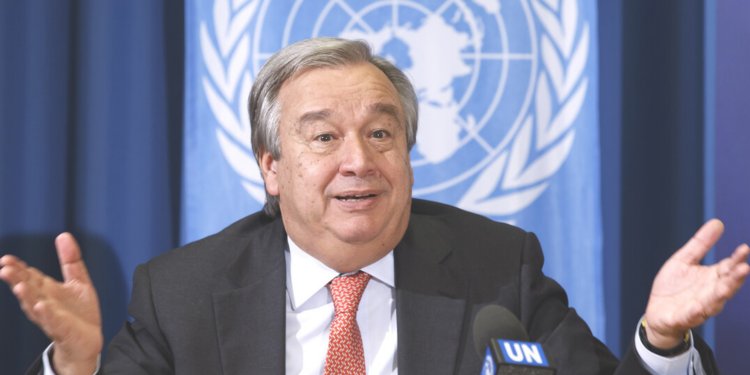 Last September, the United Nations Secretary-General António Guterres claimed climate, weather and water-related disasters had increased by 500% over the last 50 years. According to the political and environmental science writer Professor Roger Pielke this is “pure misinformation“. He goes on to suggest that “you will never find a more obvious and egregious wrong claim in public discussions from a more important institution”. Matters were made even worse, in Pielke’s view, because the false notion was “legitimised” by none other than the World Meteorological Organisation (WMO), one of the founding bodies of the Intergovernmental Panel on Climate Change.

Pielke refers to the graph above based on figures from CRED EM-DAT, the same database the WMO and Guterres based their false claim on. Of course 2022 is not fully complete, but total disasters will be around the 330 mark, and this will be similar to the average for the last decade. Compared with the 2000s, the numbers are about 10% lower.

Based on these data, said by CRED to be reliable since 2000, Pielke notes there is no evidence that the number of global and climate disasters is increasing. “That means that – undeniably – there is no evidence to support another false claim by the UN that, ‘The number of disaster events is projected to reach 560 a year – or 1.5 each day, statistically speaking – by 2030’.”

Preliminary estimates suggest that around 11,000 people lost their lives this year as a result of weather and climate-related disasters, a figure around the average for the last decade. The overall death rate was about 0.14 people per million, and was one of the five lowest annual death rates since data were compiled. Pielke ventures that the figure is the lowest in all recorded human history. Just two decades ago, the figure was 20 times greater at 2.9 per million. The diminishing human impact of disasters is a science and policy success that is “widely under-appreciated”.

In fact, as the Daily Sceptic has repeatedly shown, such inconvenient facts are largely ignored in most mainstream media, as individual weather events are relentlessly catastrophised in the interest of upending society, via the Net Zero political project. Weather catastrophisation is now the main climate propaganda tool since global warming went off the boil over two decades ago. Pielke noted that he had spent 30 years working to understand trends in disasters. “Along the way, I’ve observed a concerted and successful effort by climate advocates to create and spread disinformation about disasters, knowing full well that virtually all journalists and scientists will stay silent and allow the false information to spread unchecked – and sometimes they will even help to amplify it,” he wrote.

“I am curious. When are journalists going to start reporting the facts about disasters, and call out disinformation,” he asked.

Don’t hold your breath just yet Professor, might be the reply. On September 14th, the Daily Sceptic reported that four leading Italian scientists had undertaken a major review of historical climate trends, and concluded that declaring a ‘climate emergency’ was not supported by the data. Our report went viral, was viewed over 25,000 times, retweeted over 9,000 times, and eventually made its way into other media outlets.

It led to the inevitable ‘fact-check’. State-owned Agence France-Presse reported that “top climate experts” said the paper “cherry picked” data. One of the experts was Friederike Otto who works out of Imperial College London, and is at the forefront of the pseudoscientific ‘attribution’ of single weather events to humans allegedly causing the climate to change. She said that “of course” the authors were not writing the article in good faith. “If the journal cares about science they should withdraw it loudly and publicly, saying that it should have never been published,” she said.

As a result of this pressure, the publisher of the paper Springer Nature made the following announcement: “Readers are alerted that the conclusions reported in this manuscript are currently under dispute. The journal is investigating the issue”. Of course all science is “under dispute” (except, it seems, the ‘settled’ science of climate change), but that is not the reason why this shameful announcement was made. It remains on the paper to this day.

Pielke concludes that planet Earth is a place of extremes. Hurricanes, floods, drought, heatwaves and other types of extreme weather are normal and always have been. The ability of societies to prepare and recover from extreme events is a remarkable story of policy success – deaths related to disasters have plummet from millions per year a century ago to thousands per year over the past decade.

“Unfortunately nowadays, every weather and climate disaster becomes enlisted as a sort of ‘poster child’ for climate advocacy. Every extreme event and associated human impact is quickly turned into a symbol of something else – such as failed energy policies, rapacious fossil fuel companies, evil politicians, or callous jet-setting billionaires. It is a simple and powerful narrative, and one that is also incredibly misleading,” he concluded.

The Shadowy Group That Brought Mask Mandates to the U.K.

Why is it Okay to be Offensive if You’re Left-Wing?