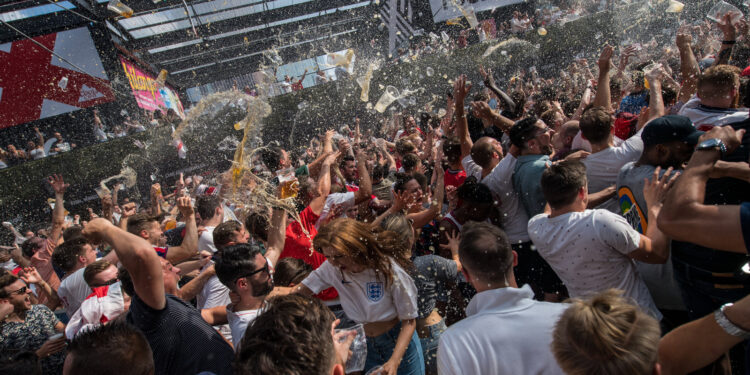 England’s progress in the World Cup could drive up the number of Covid cases, according to the Guardian, which says this is the view of ‘scientists’ and ‘researchers’. How many, exactly? Two, it turns out.

Researchers say that mass gatherings in pubs, and in homes where friends and relatives get together to watch the team compete in Qatar, could lead to a rise in infections.

They point out the effect that the Euro 2020 competition had. “It was a much bigger event in terms of mixing people and spreading the virus than the celebrations we had at Christmas that year,” said Professor Christophe Fraser, an epidemiologist at Oxford University. “That suggests that a key factor in influencing infection rates this year will be England’s performance during the World Cup.”

People who go to large gatherings to watch matches – including England’s game against Senegal on Sunday evening – and then plan to visit an elderly or immunocompromised relative later should be careful to take a lateral flow test beforehand, he advised. They should also take up all offers of a vaccine.

He added: “We are in a much better position than we were two years ago, of course. Vaccines have made sure of that and there is no reason that people should not enjoy the World Cup. I intend to do so.”

According to the most recent data from the Office for National Statistics, cases across the U.K. topped one million for the first time since mid-October – although they showed a decrease in Wales, while trends were uncertain in Scotland and Northern Ireland. Such numbers are still well below levels seen earlier in the year, when infections climbed to nearly four million in July and just under five million in March.

Nevertheless, scientists warn there is potential for a jump in cases this winter. “We are in a triple dynamic of infections,” said immunologist Sheena Cruickshank of Manchester University. “We have Covid, we have respiratory syncytial virus – RSV – and we have influenza.

“At the same time, we are seeing increases in hospitalisations for all three of these diseases. For good measure, none of them are at the point of peaking. It is a worry, especially as we know how stretched the NHS is.”

The problem was compounded because so many people were not getting vaccinated, Cruickshank added. “For example, the fact that only 54% of people aged between 50 and 64 years have taken the offer of a booster is worrying. That means we have the potential for a lot of waning immunity in a lot of people.”

People should think twice about going to parties; consider involving themselves in more outdoor activities; wear masks whenever appropriate and have a vaccine whenever offered one, she added.

Health experts have also warned that since the easing of Covid restrictions in the UK there have been more opportunities for other infections to spread. An example is provided by rises in numbers of strep A bacterium cases which have led to the deaths of six youngsters. Reduced mixing among children over the past two years may have caused a drop in population-wide immunity, resulting in a rise in transmission. Parents have been advised to keep a close watch out for symptoms that include pain when swallowing, fever and red and swollen tonsils.

I wonder how many phone calls the Guardian hack had to make to scientists and researchers before he found enough to justify the headline: “England World Cup success could drive up Covid infections, scientists warn.”