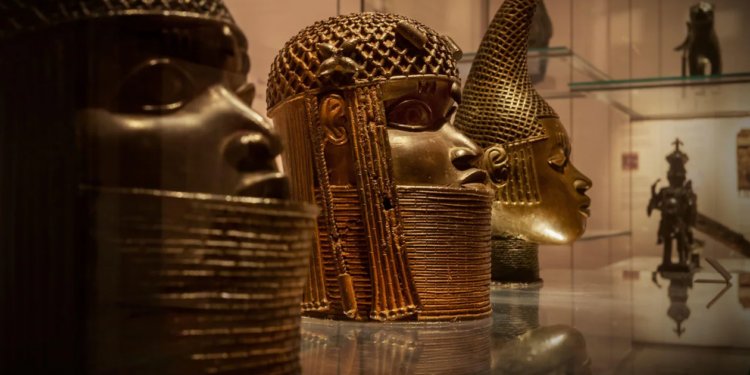 From 1946 to 1957 the British Government’s Colonial Office funded the purchase of Nigerian ‘Benin Bronzes’ from the British Museum and on the international art market, to stock museums in Lagos and Benin City. These collections were handed to the new nation at independence in 1960.

More brass than bronze, Benin’s artworks are among the finest examples of lost-wax casting, a skill lost in Nigeria today. Many were made by melting the brass and copper ingots, often formed into bracelets called ‘manillas’, which since the 15th century Portuguese traders had traded with the Obas (rulers) of Benin for slaves, ivory and other goods.

In the 1890s, the Oba was still selling slaves and among the aims of the 1897 British punitive expedition to depose him was to close down this remnant of the slave trade. His palace was burned and a large number of bronzes looted, with those which weren’t sold to defray the expedition’s costs mainly remaining with officers and their families.

In the 20th century these pieces were gradually donated to museums or sold by executors on the open market, where they were so little valued that the Colonial Office needed to spend only modestly to stock the two museums. One officer gave to his old Cambridge college the bronze cockerel whose return last year to today’s Oba was a forerunner of the current rush to restitute. The Charity Commission has already given London’s Horniman Museum permission to follow suit, while its decision on museums in Oxford and Cambridge is pending.

The Restitution Study Group (RSG) represents Americans who trace their descent from West African slaves sold by Benin’s Obas, who enforced with violence their monopoly on the trade. The RSG has urged the Charity Commissioners to leave the artworks where they are, safely housed and accessible for all comers to admire, here as around the world. “Black people,” the RSG says, “do not support enriching the heirs of slave traders just because they [too] are black.” Their legal bid to stop the Smithsonian restituting bronzes failed in part, and 20 of 29 pieces were handed over privately to Nigeria’s National Commission for Museums and Monuments (NCMM) in October. Another 20 bronzes are pending deaccessioning and the RSG’s lawsuit is pending.

What, then, of the artworks inherited by Nigeria in 1960? In April 2002, Martin Bailey of the Art Newspaper reported his discovery that a 12” bronze Oba’s head at Windsor Castle was not a replica as Queen Elizabeth had been told, but the original, stolen from Lagos Museum. Ahead of his state visit in June 1973, General Yakubu Gowon had commissioned a suitable replica, but it turned out to be ridiculous. One Saturday he phoned Dr. Ekpo Eyo, Director of the Antiquities Department and Head of the National Museum, to say that he was coming round that morning to choose a gift. Eyo rushed to the museum and managed to hide a number of the finest, unique pieces before Gowon turned up and took away the Oba’s head.

As the Art Newspaper reported:

Dr Eyo was horrified, because it was quite improper for the state to be raiding the museum. [He] also realised that it would weaken Nigeria’s position in the debate over repatriation of the Benin bronzes. The gift also made a mockery of Nigeria’s export regulations, since a licence would never have been granted by the Antiquities Department for such an important item”. Her Majesty was duly told the gift was a replica, and this was believed – at least in the UK – until 2002.

In 1978 I was on a photographic assignment in Nigeria, and having admired the bronzes in the British Museum, I asked if I might see the local museum’s pieces when we were in Benin. This was not at all welcome, but I did get in, and was alarmed to see many gaps in the display cases and shelves. An embarrassed curator told me quietly that when “the Big Man” (he meant General Olusegun Obasanjo) or his ministers wanted a gift for a foreign dignitary, they would send to the Benin Museum, and you didn’t argue with men with guns. Of course I’ve no proof of that, but in view of what we now know General Gowon had done five years before, it’s feasible.

I’ve tried repeatedly to find out where there could be inventories of Lagos and Benin Museums’ holdings in 1960, and which of those items they can produce today, but no one seems to know where the lists and photos might be. The Biafran War didn’t touch Benin so looting at that time couldn’t explain any missing pieces, though Benin is hardly safe today: in September the Nigerian Government hired the rebel warlord ‘Tompolo’ to protect oil pipelines instead of blowing them up. Tompolo’s base, Oporoza in Delta State, is just 50 miles from Benin.

Digital Benin has just gone online, a remarkable illustrated database of Benin Bronzes around the world. The British Museum’s 944 pieces head the list, working down through 131 institutions to the Hearst Museum of California’s single brass bell. Nearly all the 5,246 objects are well illustrated and described: photos show all but two of Lagos Museum’s 81 declared bronzes, though 11 of them are shown in black-and-white photos from old file cards for some reason.

The mystery is Benin Museum’s 285-piece collection. 130 have colour photos of varying usefulness, but 155 pieces – that’s 56% of the entire collection – are illustrated only by old sepia prints stapled to file cards. Why no modern photos? Can the Oba or Nigeria’s NCMM produce these 155 pieces for independent verification? What does strike one is how few pieces of much merit are listed for Benin and how many are fragmentary, exceptions being the Jesus College cockerel mentioned above and a bronze head also just restituted by Aberdeen University.

I believe I saw better pieces still in place in the museum in 1978. Six years ago the Sunday Telegraph’s Colin Freeman visited Benin to learn more about the demand being made at that time for Jesus College’s cockerel, but found the museum “currently closed for refurbishment” and couldn’t get in (report of October 9th 2016). Nor apparently could the same paper’s Craig Simpson, who was there just this month. Has any outsider seen inside that museum since 1978?

Nigeria’s Government is waging unending low-level war in the north against largely Muslim factions, to whom representations of humans or animals would be haram. Bearing in mind what the Taliban and IS did to antiquities and archaeological sites in places they took over, one doesn’t like to imagine what could happen if in the rush to restitute, the world’s museums and galleries were denuded of their irreplaceable Benin Bronzes, and fanatics then pushed their campaign as far south as Benin City.

A voice largely absent from the restitution furore has been that of the Oba himself; it’s his supporters who make the noise. One can sympathise. His ancestors’ centuries of selling their fellow Africans into slavery can’t be a comfortable legacy, and members of the punitive expedition were repelled by the grisly remnants of murder and human sacrifice they found at Benin palace in 1897.

The British Museum’s curators have steered a dignified course through the fuss, but can’t have been pleased to hear that activists in Benin are now in revolt against the projected Edo Museum of West African Art, to which the British Museum has already contributed £3 million and which would host revolving displays in Benin of bronzes loaned from European and American museums. This, the objectors say, is colonialist infiltration, and nor must anything be given to their Government’s NCMM – everything restituted must become the Oba’s personal property.

If it seeks to claim the moral high ground, today’s Nigerian state has work to do. General Obasanjo, still with us, should declare for the record that neither he nor any of his junta were responsible for removing artworks from the country’s museums as alleged, as General Gowon is now known to have done in 1973. There is the mystery of exactly what the two museums inherited in 1960, and where all those bronzes are today; and a leading expert tells me that though the British Government gave to Benin in 1914 a full set of replicas of the British Museum’s world-renowned Benin bronze altar panels, those replicas have now disappeared – where are they?

The restitution lobby likes to portray overseas Benin bronzes as proceeds of a crime and which must therefore be returned; indeed the excesses of the 1897 expedition are hard to overlook. But it did finally stamp out the slave trade, and nor should one forget the large numbers British sailors of the Royal Navy’s West Africa Squadron who died of disease in the Gulf of Guinea in the 19th century, manning the blockade which sought to prevent slave ships of other nations collecting their human cargoes from the Obas.

For the Restitution Study Group, the bronzes are proceeds of centuries of a greater crime, being literally cast from metal paid to the Obas in exchange for their manacled ancestors. Like this writer, the RSG wants the bronzes retained in museums around the world to memorialise both that crime and the world-class craftsmen whose skills had died out long before the modern country of Nigeria came into being.

One can hope the Charity Commissioners and others considering their response to claims on the Benin bronzes will agree that the restitution lobby’s voice is not the only one worth hearing, and that today’s decision-makers may not have all the answers. The prudent course is for the Horniman and other museums to be advised to give Nigeria indistinguishable 3D-printed replicas, at least until that country one day has reliable electricity and security and can guarantee conservation standards. Meantime, may people around the world continue to admire these inspirational bronzes by West African artists in their local museums and galleries.