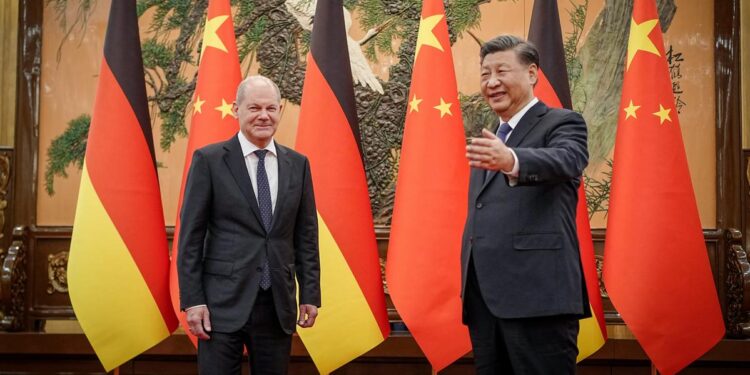 On Thursday German Chancellor Olaf Scholz published a very interesting – and probably historic – essay in Politico. “We don’t want to decouple from China,” the headline ran, “but can’t be overreliant”. Yet this somewhat banal statement papered over some radical claims in the text. Consider the following paragraph:

No country is the “backyard” of another. What is true in Europe regarding Ukraine is also true in Asia, Africa or Latin America.  It is here that new centers of power are emerging in a multipolar world, and we aim to establish and expand partnerships with all of them. Thus, in recent months, we have carried out in-depth coordination at the international level — with close partners such as Japan and Korea, India and Indonesia, and countries in Africa and Latin America too. At the end of next week, I will travel to Southeast Asia and the G20 summit, and while I’m visiting China, Germany’s federal president will be in Japan and Korea.

Note the highlighted text: Scholz and the German government take for granted that what is emerging is a multipolar world; and they intend to become flexible in their foreign policy, to take advantage of this. Scholz’s vision is directly opposed to the rhetoric coming out of Washington DC. The Americans believe the new strategy should be to hunker down and reduce engagement with the non-Western world in order to preserve Western – or, more properly, American – hegemony.

Until very recently, writing articles pointing to the emerging multipolar world (and the ensuing geopolitical landscape) was enough to get you attacked on Twitter. I have been writing about this since March, and have been denounced as everything from a Putin apologist to a stooge of the Chinese government. Yet now a major world leader is saying the same thing. Suppressing this nascent reality will now become all but impossible: the genie is out of the bottle.

Some have suggested that America will not allow Germany to go down the path of accepting multipolarity. If or when economic – and even possibly military – conflict between the United States and China becomes very acute, the Europeans will be forced to choose a side. You can be sure that the Germans have already taken this into account and factored it into their strategy. The simple fact is that America is no longer Europe’s largest trading partner – that is China. The numbers below bear this out.

As we can see, China has overtaken the United States. Europeans have had a bad experience with their sanctions against Russia, and although the press continues to promote them and European leaders have not yet been able to walk them back publicly, there is widespread discontent among those leaders. If America insists on Europe cutting its ties to China – while China makes no similar demands regarding the United States – that will be a very tough sell indeed.

Here’s where the United Kingdom comes into the picture. If you add together US and UK trade with the EU, it does vastly outstrip trade with China. This raises the possibility that America and Britain will form a united front to pressure the EU into cutting ties with China. It is debateable whether this is a sensible proposition for the US – I believe that it would destroy the US economy – but there is no doubt what such a stance would mean for the British economy.

Living standards in Britain would plummet if these kind of trade war tactics were adopted. It is likely that if the UK got into a trade war on three fronts – with Russia, China, and the EU – living standards would fall far below those of even the poorer Eastern European EU member states. Given that one third of products consumed by British consumers are imports, the country would likely collapse into a hyperinflationary heap. Such a collapse would be comparable with Russia’s horrendous collapse in the 1990s.

Yet such a scenario is not impossible to imagine. Britain may well decide to stand with the United States against the rest of the world.