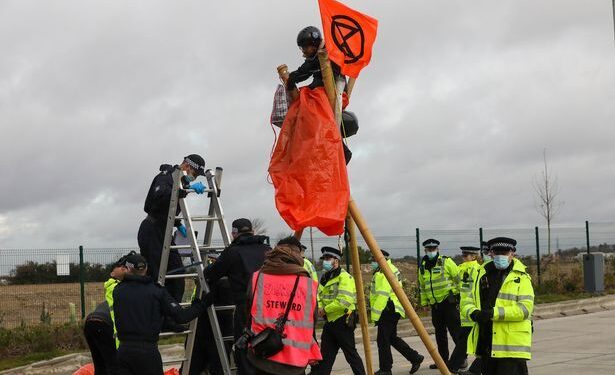 The other day Michael Deacon wrote in the Telegraph about Just Stop Oil’s antics and likened them to a cult. He was right in every way, but his analysis didn’t quite go far enough.

As a writer I have long indulged the conceit that I am a sort of historian. This has left me with a lifelong sense that I am a voyeur at a car crash, a passive witness to an endless cascade of confusion, stupidity and brutality, punctuated by moments of brilliance and invention, that defines our existence.

There is a long history of cults stretching back over thousands of years. A common, but not ubiquitous, feature is the notion that the world is about to end, usually as a punishment for human misdemeanours, and sometimes accompanied conveniently by a date. When the date passes and the world fails to end, the cult is obliged to reinvent itself or disappear. Just Stop Oil and Extinction Rebellion are not so foolish as to name the day our evil way of life will destroy the planet, though they are obsessed with the five minutes to midnight idea. The day the Earth catches fire is depicted as being merely imminent. Both organisations predicate their ideologies on the basis that this will be as a consequence of humanity’s failure to take action to avert the crisis.

With this devastating prospect, the gloves of course are off. With such a catastrophe looming, any action they take is legitimate, however crass (such as throwing soup over a painting) or stupid (like hanging off a bridge). Underpinning all this is the defining feature of the incipient totalitarian state: an intolerance of diversity of thought. Everyone must be coerced into their way of thinking, their views must be those held by the entire population, and any action is justified to force that to happen.

One only need look at some of Extinction Rebellion’s ramblings to see the truth about them. They profess to want ‘direct democracy’, a vision in which they will not stop until their ‘demands are met’. This flagrant abuse of the word ‘democracy’ is as lost on them as it was under former totalitarian regimes.

The underlying foundation is the reactionary fantasy of some pre-industrial utopia where everyone lived a life of sustainable sanctity, all the while overlooking the crippling effects of starvation and disease and being subject to – guess what? – the vagaries of the climate.

I of course would be an enemy in their eyes. But I have no problem with the idea that climate is changing. But it has always changed, and a central part of human ingenuity is the ability to adapt to a constantly changing climate. No-one has yet demonstrated to me how much of the current rate of change is attributable to human activity, or the extent to which changing that activity would have any effect on slowing down that change. These are crucial questions, but usually ignored in the race to create a sense of millenarian doom and turn our world upside down in the pursuit of the Net Zero fantasy.

I have also invested thousands of pounds in solar panels and batteries. They have almost annihilated my electricity bills and, given the worthlessness of savings, make obvious sense if one has the capital to spend. I’m all for increasing renewables, but I profoundly object to being confronted by eco gangsters, bent on panicking everyone into futile gestures. Having just spent a month travelling in the American West where I saw precisely one (unused) EV charging point, I now know the truth meaning of Britain’s Net Zero targets – set against the rest of the world, they will make Net Zero difference.
That doesn’t mean we don’t do everything we can to change the way we live and improve how we do things, but in a measured and considered way and not in a panic. Panic will get us nowhere except somewhere worse than we already are.

The Dartford Bridge stunt also has to be seen for what it really was. Early Christian martyrs competed with each other to be tortured and killed in the most extravagantly awful fashion. Ostensibly, they were dying for their faith, and some certainly thought they were, but they had fallen over themselves to make sure the Roman authorities did their worst. These high-end martyrs were not doing this for the sake of impressing the wider Roman public. Their real purpose was showcasing their righteousness to other Christians like St Jerome who regaled others with titillating tales of hideous deaths. The worst thing that could have happened to them was if they had been ignored.

Competitive martyrdom was a real phenomenon. The Dartford Bridge stunt fell into the same category. The two idiots involved were showing off to their eco chums, upping the stakes, raising the bar for the other saints among their ranks who – if they want to be eco celebs – will have to come up with something even more insane and dangerous if they want prestige and fame within the movements.

And therein lies a very interesting prospect. Since the world is unlikely to end any time soon, and no government worth its salt can possibly give in to these tactics and blackmail, the eco warriors are going to become gradually more frustrated.

By boxing themselves into a corner with uncompromising demands, they are presented only with either giving up and losing face or having to push their campaigns ever further.

They have probably also reached already the maximum extent to which their tactics can garner wider support. A story has emerged of a woman who died after a road accident, the ambulance allegedly having been held up in the congestion caused by the Dartford Bridge protest. There is only so far the public will stomach the movement’s claims that such outcomes are an acceptable price to pay.

All this makes it almost inevitable that the eco movements will begin to splinter, breaking up into factions among which will be some extremists who believe they must resort to outright violence to get their way. Since the groups include some youthful hotheads and, as we all know, ‘there is no sinner like a young saint’, I’d say this is a virtually inevitable outcome.

It is precisely the direction the women’s suffrage movement took over a century ago, dividing into two organisations: the suffragists and the suffragettes. The suffragettes (the Women’s Social and Political Union) under the leadership of among others Christabel Pankhurst resorted to violence, justifying it with quasi-religious binary thinking by depicting the battle as one between good and evil, in which the government is the prime force of evil (exactly how the eco movements depict their campaigns). The war the suffragettes waged was thus a ‘just war’, the justification wheeled out across history to beat someone else up when they don’t do what you want.

Arguments have raged ever since about the impact of the suffragettes’ violent acts, but the arrival of the Great War changed everything and it is now simply not possible to determine whether suffragette violence led to women being given the vote.

The prospect of violence will horrify the ranks of retired vicars and other comfortably-off leisure protesters with their plastic boxes of sandwiches whose only ambition is to warm the cockles of their hearts with an afternoon of righteous zeal in the middle of the road while destroying other people’s businesses and preventing those selfish enough to be ill from getting to hospital. The sight of violence breaking out in eco protests (whether by the eco warriors or by their victims), or even eco suicides, will traumatise the moderate wing.

This is a serious prospect, and another is that if the protests are dragged out long enough the movements will lose momentum and simply dwindle. We can at least hope for that, but in the meantime these useful idiots are playing directly into the hands of an ever more controlling state. One of the most likely outcomes in the near future as a result of economically damaging protests is more state surveillance of everyone, and more restrictive laws on wider freedoms, such as being able to look at paintings in galleries without having to stand a long distance away.

There is one conspicuous difference between the eco warriors and early Christians though. The early Christian martyrs were only focused on their own salvation. Everyone else could go to hell (literally). The eco warriors are the ultimate narcissistic cult. Everyone must be recast in their image and fall down in abeyance before their righteousness. Their Inquisitorial intolerance is a frightening facet of the human condition.

I’ll finish with a story about a friend I’ve known for 48 years. She castigated us recently for our recent trip to the U.S. since she is now an Extinction Rebellion supporter and goes on marches and demonstrations. In the same breath she proudly showed us the architectural plans for the £200,000 extension she is having built and which will cover half her garden in concrete, cement and bricks. She was wholly oblivious to the irony. Oh, and she won’t have solar panels ‘because I don’t like the look of them’. No doubt her zeal will keep her warm when electricity gets too expensive. That’s your middle-class eco warrior. You really couldn’t make it up.