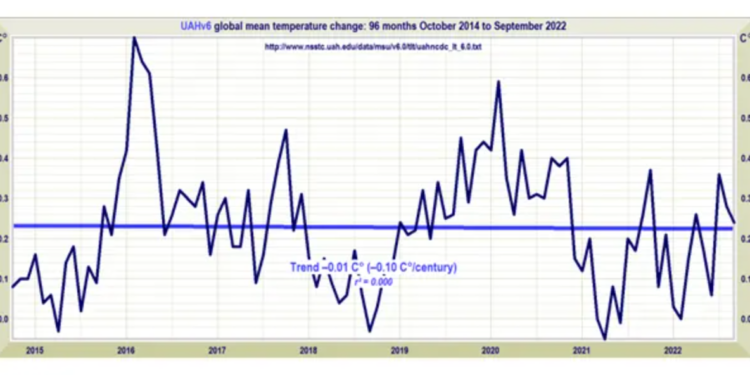 A major survey into the accuracy of climate models has found that almost all the past temperature forecasts between 1980-2021 were excessive compared with accurate satellite measurements. The findings were recently published by Professor Nicola Scafetta, a physicist from the University of Naples. He attributes the inaccuracies to a limited understanding of Equilibrium Climate Sensitivity (ECS), the number of degrees centigrade the Earth’s temperature will rise with a doubling of carbon dioxide.

Scientists have spent decades trying to find an accurate ECS number, to no avail. Current estimates range from 0.5°C to around 6-7°C. Without knowing this vital figure, the so-called ‘settled’ science narrative around human-caused climate change remains a largely political invention, not a credible scientific proposition. Professor Scafetta has conducted extensive work into climate models and is a long-time critic of their results and forecasts. In a previous work, he said many of the climate models should be “dismissed and not used by policymakers”. Along with around 250 professors, he is a signatory to the World Climate Declaration which states there is no climate emergency and also notes climate models are “not remotely plausible as global tools”.

Scafetta’s latest work grouped 38 major climate models into low, medium and high ECS values, ranging between 1.8°C and 5.7°C. He found that models in the medium and high category “ran hot” in over 95% and 97% of cases respectively. The lower models were said to have done better when compared to global warming calculated for the period by the major surface datasets of 0.52-0.58°C. But the UAH satellite data showed warming up to 30% less during this period, suggesting even the low warming models produced “excessive warming” from 1980-2021.

According to Scafetta, these results are showed that the ECS figure could be as low as 1.2-2°C. Particular concern is expressed about surface temperature records that “appear to be severely affected by non-climatic warming biases”. Scafetta concludes that surface-based temperature records are likely to be affected by warming biases, such as the urban heat island effect due to expanding urban development, and subject to natural oscillations that are not reproduced by climate models. He concludes: “The global warming expected for the next few decades may be even more moderate than predicted by the low ECS-GCMs [Global Circulation Models], and could easily fall within a safe temperature range where climate adaptation policies will suffice.”

Scafetta’s work is vital in providing a realistic insight into the dominant role played by climate models in promoting the command-and-control Net Zero political agenda. Many of the constantly promoted climate thermogeddon scares use forecasts based on high ECS values. The higher values are behind every statement from bureaucrats, politicians, green activists and journalists that we are heading for a 2-3°C increase in global temperature in the near future. In the absence of any definitive ECS figure, these predictions are guesses.

In fact, once the ECS figure falls to around 1°C, it is moving into margin of error territory. However, many scientists have more or less given up trying to calculate ECS, since measuring the non-linear atmosphere is proving as difficult as it ever was. The atmosphere is a chaotic system with many powerful influences reacting unpredictably with each other. The huge heat transfers that obviously have a considerable part to play in climate are far from completely understood. Recent suggestions that modellers can ‘attribute’ single event weather events to human-caused climate change are unprovable, and little more than figments of over-active, agenda-driven imaginations. Furthermore, it is possible that carbon dioxide becomes ‘saturated’ beyond certain levels and its effect as a warming gas rapidly declines.

What we do know is that over the last 20 years, global warming has started to run out of steam. The latest September UAH satellite data, considered in some scientific circles as the most accurate measurement we have, show the current standstill has been extended to eight years. But whereas satellite data are common and invaluable in many geographical fields, these temperature results are less welcome. It is not hard to see why. Scafetta calculates that the results since the start of recordings around 1980 are 30% below surface temperature datasets. As it happens, the two adjustments since 2013 by the U.K.’s Met Office to its HadCRUT global surface temperature record have increased recent warming by a similar amount. Similar upward adjustments are to be found in the other major global datasets. A previous temperature pause from about 1998-2010 is no longer visible in these records.

Claims of ‘record’ heat years and ever higher temperatures are taken exclusively from the surface records. The satellite record is largely ignored. There are even attempts to cancel the inconvenient figures, with Google AdSense recently ‘demonetising’ the site of Dr. Roy Spencer, the Principal Research Scientist at the University of Alabama in Huntsville, one of the main compilers of the UAH satellite record. The record, of course, that is a vital part of Professor Scafetta’s work investigating the accuracy of climate models.