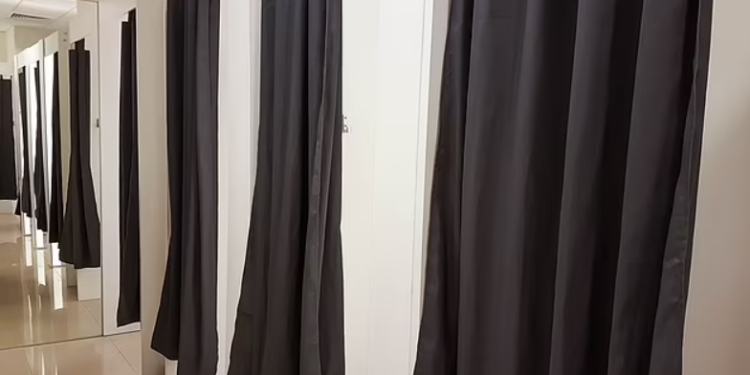 Last week Charlotte Kirby, 25, posted a video tearfully revealing how two men had walked in on her while she tried on outfits at a unisex changing room at Primark in Cambridge.

Now a Mail on Sunday investigation has found that her ordeal is common, unearthing repeated distress at M&S and rival chains with no sex-segregated spaces.

One mother said that while taking her teenage girl to M&S for her first bras, they encountered a man emerging from a cubicle with his testicles exposed.

Another mother tweeted how at another M&S store, in Exeter, a man left open the door of his cubicle in the ‘gender-neutral’ changing rooms, exposing himself as he tried on trousers without any underwear.

A woman complained and the man was then escorted out, while protesting.

Another mother said she had banned her 13-year-old daughter from going clothes shopping alone after discovering her local H&M provides only unisex changing rooms.

On Mumsnet, a woman recounted how she had been secretly filmed in a unisex changing room.

This year a Met Police officer was given a suspended prison sentence for covertly filming a woman in a Primark dressing room.

H&M, John Lewis, M&S, Monsoon and Primark no longer offer female only spaces after transgender activists called for unisex changing rooms – despite a survey showing that 98% of the public wanted single-sex spaces.

Tory MP Miriam Cates said: “Nobody is saying all men are a risk but if you are a predatory man you now have an open door – literally – to vulnerable women in a state of undress. I really hope these big companies wake up to what they are doing because it is not safe.”

Meanwhile, in the States a high school banned some female athletes from their own changing room over their objections to a male transgender student using it.

Vermont’s state law means that students can play sports and use the locker [changing room] which correspond to the gender with which they identify.

Blake Allen, a player on the team, told WCAX how uncomfortable it makes her feel, saying “its a huge thing… everyone’s asking ‘why aren’t you allowed in the locker room?'”

Shortly after the incident, the school sent out an email to families of the players, informing them that the school has “plenty of space where students who feel uncomfortable with the laws may change in privacy”.

Superintendent Layne Millington, who oversees the Orange County School District, has yet to comment on the controversy.

With about 10 players on the team, Allen said that making each of them getting changed in the single bathroom stall doesn’t make sense.

“They want all the girls who feel uncomfortable to get changed in a single-stall bathroom, which would take over 30 minutes,” she said. “Where, if one person got changed separately, it would take a minute, like no extra time.”

Allen said the issue isn’t with the transgender athlete playing on the team, but being in a locker room where the female students are at their most vulnerable.

“There are biological boys that go into the girl’s bathroom, but never a locker room,” Allen said.

Commenting on the story, Caitlyn Jenner blasted the “hijacking and politicisation” of the trans issue by the Left:

The Left has hijacked and politicised yet another minority group in our wonderful country and this time it’s trans people. As a result of their radical Left and their use of identity politics agenda, they’re really driving this country apart. I thought Joe Biden was supposed to be the great unifier…

Do these girls have the right to comment and tell the school board how uncomfortable they are being in the locker room with basically a biological boy with a penis? Absolutely they do. What is the school’s solution? Let’s ban the 10 girls who complained. Put them off in the corner in their own little part of the locker room and do nothing when it comes to this trans person. Everything is out of whack right now and these things have to stop.

Lockdowns Have Left More Than a Third of Young People Feeling Their Life is Spiralling Out of Control, Study Finds