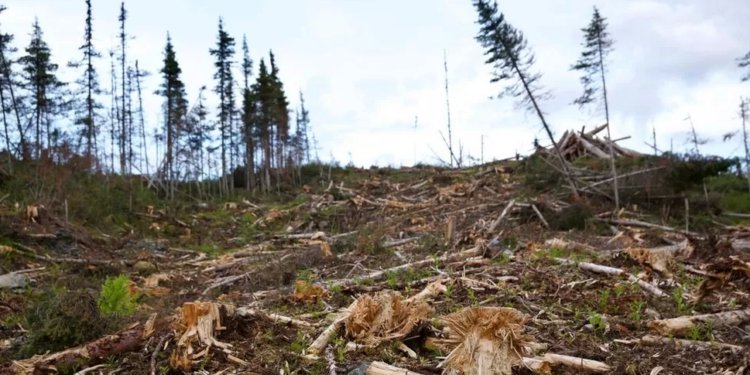 A company that has received billions of pounds in green energy subsidies from U.K. taxpayers is cutting down “environmentally-important forests”, a BBC Panorama investigation has found. BBC News has the story.

Drax runs Britain’s biggest power station, which burns millions of tonnes of imported wood pellets – which is classed as renewable energy. The BBC has discovered some of the wood comes from primary forests in Canada. The company says it only uses sawdust and waste wood.

Panorama analysed satellite images, traced logging licences and used drone filming to prove its findings. Reporter Joe Crowley also followed a truck from a Drax mill to verify it was picking up whole logs from an area of precious forest.

Ecologist Michelle Connolly told Panorama the company was destroying forests that had taken thousands of years to develop. “It’s really a shame that British taxpayers are funding this destruction with their money. Logging natural forests and converting them into pellets to be burned for electricity, that is absolutely insane,” she said.

The Drax power station in Yorkshire is a converted coal plant, which now produces 12% of the UK’s renewable electricity. It has already received £6bn in green energy subsidies. Burning wood is considered green, but it is controversial among environmentalists.

Panorama discovered Drax bought logging licences to cut down two areas of environmentally-important forest in British Columbia. One of the Drax forests is a square mile, including large areas that have been identified as rare, old-growth forest.

The provincial government of British Columbia says old-growth forests are particularly important and that companies should put off logging them. Drax’s own responsible sourcing policy says it “will avoid damage or disturbance” to primary and old-growth forest.

However, the latest satellite pictures show Drax is now cutting down the forest. The company told Panorama many of the trees there had died, and that logging would reduce the risk of wildfires. The entire area covered by the second Drax logging licence has already been cut down.

The BBC report explains that although burning wood produces more greenhouse gases than burning coal, the electricity is classed as renewable because new trees are planted to replace the old ones and “these new trees should recapture the carbon emitted by burning wood pellets”. However, “recapturing” the carbon takes decades, plus the “offsetting” can only work if the pellets are made with wood from sustainable sources. It adds:

Primary forests, which have never been logged before and store vast quantities of carbon, are not considered a sustainable source. It is highly unlikely that replanted trees will ever hold as much carbon as the old forest.

Panorama’s “The Green Energy Scandal Exposed” is being shown on BBC 1 at 8pm this evening, October 3rd, and will be on iPlayer afterwards.

Cut Gas Use by 13% to Avoid Blackouts This Winter, IEA Warns Europe