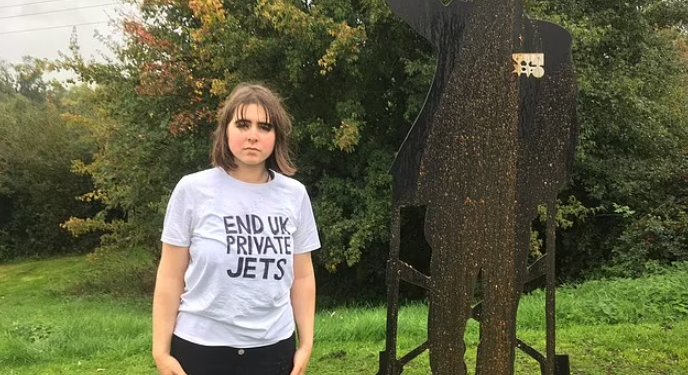 A nutty green protestor has prompted fury over her wacky decision to pour a bucket of human excrement over a memorial to Captain Sir Tom Moore in a protest over the use of private jets. The Mail has more.

She filmed herself pouring the canister of faeces and urine over the memorial to the late captain, who made international headlines in 2020 when he raised money for charity in the run-up to his 100th birthday during the COVID-19 pandemic.

“Every time one [private jet] takes off, it pours a bucket of sh*t and blood onto everything that Captain Tom stood for,” Maddy said in a recorded statement by way of justification for the vandalism.

But the backlash against the act has been so severe that there are already threats of pressing police charges against the eco fanatic.

One Twitter user wrote: “How will this convince people to earn private jet use? It looks like a child throwing a disgusting tantrum and being beyond disrespectful. This kind of behavior will not convince anyone to make any changes.”

Another wrote: “Hope she gets jail time for this. Not helping your cause at all, if anything I’m now against you and your cause. Disgusting honestly you should be distancing yourselves from this disgraceful behaviour not supporting it.”

A third raised questions about why Maddy is no longer a medical student: “Former medical student? What is she now? Or is that just too embarrassing to publicise.”

Worth reading in full, I suppose.

Why Won’t the Canadian Medical Association Comment on the 32 Deaths of Vaccinated Doctors Since the Rollout Began?