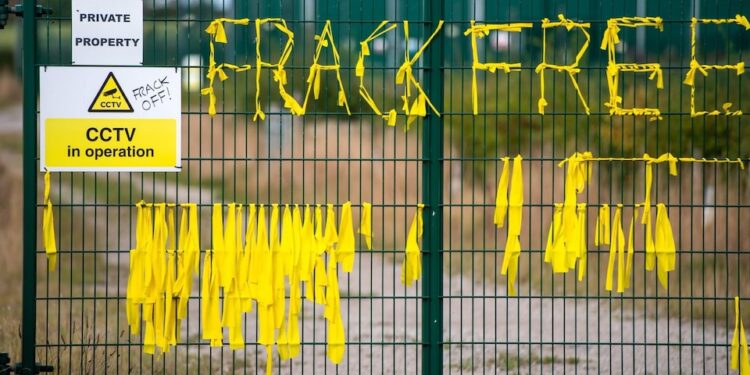 Jacob Rees-Mogg has scrapped the ban on fracking and said tremors in Britain’s countryside should be tolerated in the “national interest”. Too bloody right. The Telegraph has more.

The Business Secretary said “much has changed” since the Conservatives introduced the moratorium on fracking in 2019, including the energy crisis caused by the war in Ukraine.

He said the country needed to “explore all avenues available to us” as he also confirmed plans to issue a wave of new oil and gas licences in the North Sea.

Mr. Rees-Mogg said: “While the Government will always try to limit disturbance to those living and working near to sites, tolerating a higher degree of risk and disturbance appears to us to be in the national interest given the circumstances described.

“With this in mind, it is important that the policy relating to shale gas extraction reflects this.”

The fracking ban was prompted in part by a 2.9 magnitude tremor at a site in Lancashire, and a subsequent investigation that found it was not possible to accurately predict the probability or magnitude of earthquakes.

But Mr. Rees-Mogg said more data could be collected by allowing shale gas drilling and using the wells to better understand the risk of earthquakes.

The decision to allow fracking is likely to be unpopular with many Tory MPs, including those representing constituencies where it took place prior to 2019.

Opponents of fracking have circulated a list of Conservatives who have spoken out against it in the past. It contains seven Cabinet ministers, including Kwasi Kwarteng, the Chancellor, who said in March that new fracking sites would take up to a decade to produce gas and would “come at a high cost for communities and our precious countryside”.

Ministers hope that the reversal of the ban will spark a boom in production of shale gas that could help power Britain for decades to come. The move means fracking can resume in areas where extraction companies can secure planning and environmental permission.

Mr. Rees-Mogg said: “In light of Putin’s illegal invasion of Ukraine and weaponisation of energy, strengthening our energy security is an absolute priority, and – as the Prime Minister said – we are going to ensure the UK is a net energy exporter by 2040.

“To get there, we will need to explore all avenues available to us through solar, wind, oil and gas production – so it’s right that we’ve lifted the pause to realise any potential sources of domestic gas.”

“PayPal, You Messed With the Wrong Guy”