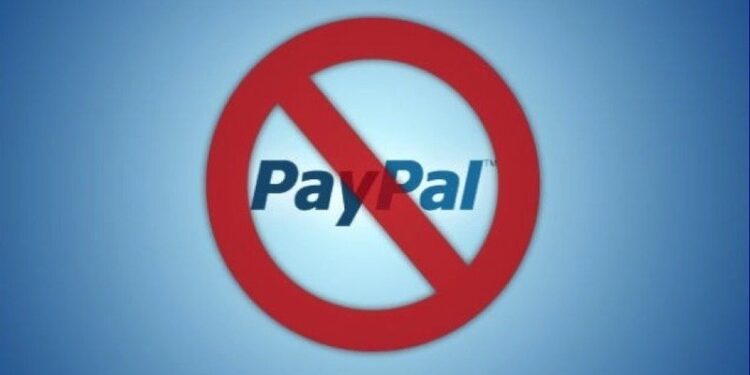 If you’re a regular donor to the Daily Sceptic and got an email from me in the small hours of the morning telling you that PayPal had closed our account and urging you to set up a new donation with a link to our donate page, don’t panic. It wasn’t a scam. PayPal really has shut down our account and the email really was from me.

I’ll tell you the full story in a moment, but just to be clear – this won’t affect the majority of people making regular donations, just those whose donations are processed by PayPal. So unless you’ve received an email from me with instructions about how to donate without using PayPal, please don’t cancel your recurring donation. I repeat: Please don’t cancel your donation. This just applies to people whose donations are being processed by PayPal and I’ve written to all of you.

The first I heard about this was on Thursday afternoon last week when I received a notification from my personal PayPal account informing me that it was being shut down because I’d violated the company’s ‘Acceptable Use Policy’. I looked at that policy and it covers things like fraud and money laundering so my first thought was it must be a mistake. Then, a few minutes later, I got another notification, this one from the Daily Sceptic’s PayPal account. That, too, had been shut down and for the same reason. Eh? That was odd. Then, another email, this one from the Free Speech Union’s PayPal account. Same story – the Acceptable Use Policy.

Now call me a cynic, but the chances of all three accounts violating the same policy within minutes of one another struck me as a bit implausible. Was something else going on?

I contacted customer services and asked what I’d done, exactly, on my personal account that ran afoul of PayPal’s Acceptable Use Policy. I’ve had it since 2013 and use it, at most, four times a year, usually to receive money from a Swiss weekly magazine I occasionally write for.

The person I spoke to said she had no idea, but if I wanted I could “escalate“ the matter and someone higher up the food chain would get back to me. I did that, obviously, and a couple of days later received a notification that my appeal has been unsuccessful. No explanation offered beyond the original one. Oh, and by the way, it would be keeping the money in that account for up to 180 days while it decided whether it was entitled to “damages” for my yet-to-be-explained breach of its Acceptable Use Policy.

It was the same story with the other two accounts. The only clue as to what might be going on was a message sent a couple of days ago from PayPal on the now closed Daily Sceptic account. The crucial passage read:

PayPal’s policy is not to allow our services to be used for activities that promote hate, violence or racial intolerance. We regularly assess activity against our long-standing Acceptable Use Policy and carefully review actions reported to us, and will discontinue our relationship with account holders who are found to violate our policies.

That message was a bit weird since it didn’t explicitly accuse the Daily Sceptic of promoting “hate, violence or racial intolerance”, or say that that was how we’d violated its precious policy. But it certainly implied it. To which my response is: How exactly? Or, more profanely: What the f*** are you talking about?

Even if the Daily Sceptic is guilty of that sin – and I defy anyone to point to an article we’ve published that promotes “hate, violence or racial intolerance” – why is that a reason to shut down my personal account or the FSU account? I still haven’t received any indication of why that’s happened. And for what it’s worth, I’ve written to the CEO of PayPal UK – Vincent Belloc, you can email him here – and the Corporate Affairs Department of PayPal US and PayPal UK (you can email them here and here), asking for some kind of explanation. No reply, obviously. Laughably, it says on the media contact page of PayPal‘s website above the email addresses: “Reporter on a deadline? Looking to book an interview or need a comment for a story?” The implication is that someone from its crack Corporate Affairs team will get back to you immediately. But I emailed them last Thursday and still haven’t heard back.

I suspect what’s really going on is that someone at PayPal – possibly the entire C-suite – doesn’t like what the Daily Sceptic or the Free Speech Union stands for. The company has form in this area. As Matt Taibbe wrote earlier back in May:

In the last week or so, the online payment platform PayPal without explanation suspended the accounts of a series of individual journalists and media outlets, including the well-known alt sites Consortium News and MintPress.

Those sites – Consortium News and Mint Press – are both left wing and they’re opposed to the war in Ukraine, which is presumably why PayPal cancelled them. Is the fact that the Daily Sceptic has published articles critical of the mainstream narrative about that war – including one in which we linked to Mint Press – the reason we’ve been cancelled? Seems a bit harsh, given that we’ve also published several articles defending Ukraine and its war effort and debunking some of the criticisms of the current Ukrainian regime.

A number of sites that have raised questions about the Covid vaccines have also been demonetised by PayPal in the past few months, including the U.K. Medical Freedom Alliance. Liz Evans, the head of the UKMFA, also had her personal PayPal account closed at the same time.

Is that fact that we’ve published data suggesting the mRNA vaccines aren’t as efficacious or as safe as we were initially led to believe why we’ve been cancelled?

Colin Wright, a former colleague of mine at Quillette and a staunch critic of trans rights dogma, was deplatformed by PayPal in June, presumably because some people in the company didn’t approve of his gender critical views. We’ve expressed similar views on the Daily Sceptic. Was that the issue?

My hunch is it’s all of the above. PayPal just doesn’t like free speech, which is why it has shut down the FSU account at the same time. There are five issues in particular where it’s completely verboten to express sceptical views and if you do you can expect to be cancelled, not just by PayPal but by YouTube, Facebook, Twitter, Instagram, etc.: the wisdom of the lockdown policy and associated Covid restrictions, the efficacy and safety of the mRNA vaccines, Net Zero and the ‘climate emergency’, the need to teach five year-olds that sex is a social construct and the war in Ukraine. Dissent from the prevailing orthodoxy in any of those areas is no longer permitted.

This is the new front in the ongoing war against free speech: the withdrawal of financial services from people and organisations that express dissenting opinions on those topics. And not just those who express them, but those who defend them, too, like the FSU. That‘s what makes this an escalation in the war on free speech. Until now, companies like PayPal, GoFundMe, Patreon and CrowdJustice have only demonetised individuals and groups whose views they disapprove of. Now, PayPal has closed the account of an organisation that defends people’s right to free speech, without taking sides on the issues they’re speaking about. Even that is no longer allowed, according to this Silicon Valley behemoth.

Fear not, comrades. I may not be able to use PayPal again in a personal capacity, but I’m confident the Daily Sceptic and the Free Speech Union will survive. Yes, we’ll take a hit, but I hope people who still believe in free speech and the importance of casting a sceptical eye over the prevailing orthodoxy will show their support by joining or donating.

And rest assured, PayPal has been expunged from all our payment systems. There‘s zero risk that if you give money to either of those organisations it will be pocketed by the fintech Death Star.

I thought about launching a campaign to get PayPal to restore its services to the three accounts, but then decided I didn’t want to have anything more to do with the wretched company. Even if it did a reverse ferret, what guarantee is there it won’t demonetise us again? No, from now on I will have nothing more to do with PayPal and if you’re a customer of the company I hope you’ll follow suit. (Here is a handy YouTube video explaining how to close your PayPal account.)

Stop Press: If anyone reading this is a donor to the Daily Sceptic or a member of the FSU based in Texas, please get in touch. In Texas, it’s illegal for large social media companies to ban users’ posts based on their political viewpoints. Is PayPal a social media company? Users can send messages to each other so… maybe. Worth exploring.

Stop Press 2: I spoke about this on GB News last night.

Nick Dixon, Toby Young and Will Jones Talk About PayPal’s attack on the Daily Sceptic, the Odious Stewart Lee and Jordan Peterson’s Visit to Comedy Unleashed