Climate Alarmists Report One Third of Pakistan Under Water – In Fact, it’s Eight Per Cent 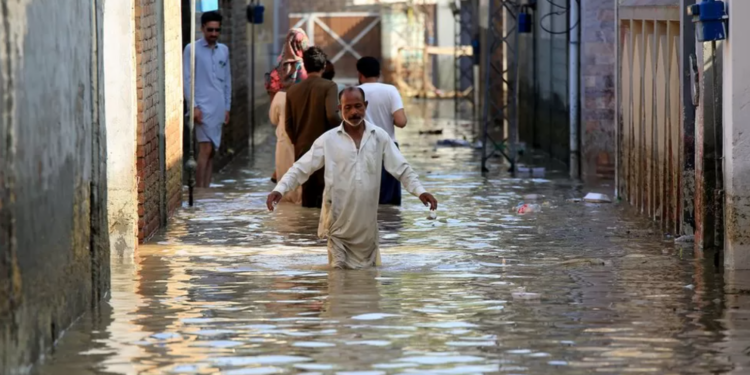 There is something rather sad – desperate even – about the attempts by green zealots and journalists to blame the tragic monsoon floods in Pakistan on human-caused climate change. There is no scientific proof to back up this assertion, but to the alarmists it has a ‘ring of truth’ and can be conveniently fitted into the pre-ordained climate change and Net Zero political narrative.

Likewise, it sounds as if it might be true that one third of the country is under water. This claim first appears to have been made by a local government minister, and was subsequently repeated around the world media. In the U.S., the TV network NBC reported the statement as fact, noting that “experts” and local officials have drawn a direct line to human-made climate change – “countries with the lowest contributions to the global crisis are becoming increasingly vulnerable to its effects”, it helpfully added. Never one not to exploit an extreme weather event, the BBC also reported that the local climate minister had said that “one third of Pakistan had been completely submerged” by historic flooding. The summer rain was said to be the heaviest recorded in a decade “and is blamed by the Government on climate change”.

The BBC has been caught out with numerous climate change errors of late, and by adding the caveat “heaviest in a decade” seems to be getting a little more careful in how it promotes the catastrophe narrative. As David Craig noted last Friday in the Daily Sceptic, there have been four massive Pakistan floods – 1950, 1992, 1993 and 2010 – which killed more people than perished this year. The death toll this year is estimated at just over 1,000, and this compares with over 3,000 in 1993.

But one third of the land “completely submerged”? Citizen journalist Paul Homewood makes the obvious point – obvious, it might be noted, to those with a basic knowledge of geography – that on the face of it the claim is an “absurd one”. Much of Pakistan is mountainous or desert, and the satellite photo below shows the area flooded is nothing like a third.

Homewood also consulted the UN Office for the Coordination of Humanitarian Affairs (OCHA), which quoted a preliminary satellite mapping estimate that 75,000 sq kms appeared to have been affected by floodwater during August. Homewood notes that the total land mass of Pakistan is 881,000 sq kms, so the flooded area is about 8%.

It’s not hard to debunk this Pakistan under water story. It’s not that hard to debunk a lot of claims about bad weather claims being caused by humans. There is no scientific proof that backs any of the implausible suggestions. They are, however, useful to feed into a narrative that pushes the command-and-control Net Zero agenda. Mainstream writers are rarely in a position to push back against this broader narrative – reporting requirements are set by people well above their pay grades and they’re simply not ‘qualified’. In his thought-provoking new book on the BBC Is it true or did you hear it on the BBC?, David Sedgwick describes the basic problem when mainstream broadcasters like the BBC toe an official line that’s at odds with the truth. Sedgwick argues they must try to convince people not to trust their own senses or instincts but trust instead BBC correspondents and hand-picked experts.

This entails, for example, convincing people there really is a ‘climate emergency’, even as those who preach this alarming message fly around the world in private jets between multiple homes. It means persuading that mankind truly is in the grip of a deadly pandemic even when reality proves stubbornly resistant. It means informing audiences that there are really 100 genders, that it’s not women who get pregnant, but ‘people’. As the BBC is obliged to invert reality in multiple ways on a daily basis, reputational damage thus becomes a real possibility. But that’s OK. As a result of its truth-bending behaviour, brand BBC might continue to plummet, but not among those who matter. Within circles of power and influence, the broadcaster’s stock remains as high as ever, higher.

In an upcoming article, I shall report on dramatic new scientific work that shows coral reefs are unaffected by gentle warming in the atmosphere. I shall argue that eco-scientists and journalists must have known that recent warming could never have been the cause of the damage and bleaching seen in the Great Barrier Reef. Yet the catastrophist narrative trying to connect it to global warming went unchallenged for over 20 years.

Are American and Ukrainian Goals Aligned?