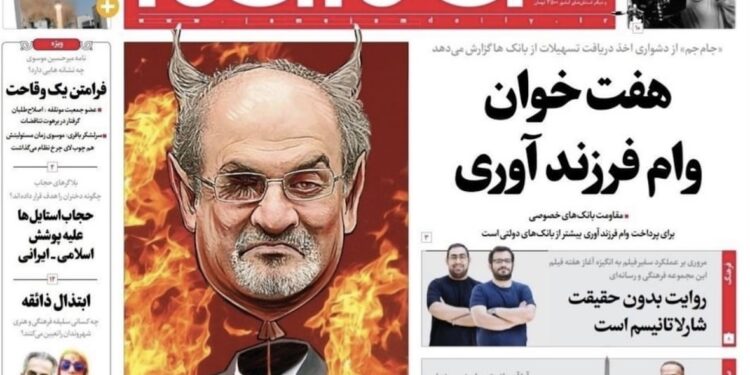 The chairman of a British-based Islamic human rights organisation which has received over £1.4 million in charity cash praised the fatwa on Sir Salman Rushdie less than a year ago. The Mail on Sunday has more.

Massoud Shadjareh, founder and chairman of the controversial Islamic Human Rights Commission (IHRC), spoke fondly of the death sentence imposed on the writer in 1989 following the publication of his novel The Satanic Verses.

The IHRC, which has been described by former Labour leader Jeremy Corbyn as representing “all that’s best in Islam”, is closely aligned with Iran and its leaders have previously declared the West as “the enemy”.

It has shown support for terrorists detained in the U.K. and the U.S., including hate preacher Abu Hamza.

Addressing an Islamophobia conference last December, Mr. Shadjareh said: “I am old enough to remember what was happening at the time of the Rushdie affair.

“We weren’t organised as a Muslim community. We didn’t even have any huge national umbrella organisations.

“But ordinary Muslims from all different backgrounds, even those who were not fully practicing, they came with the understanding that this was wrong and they supported the fatwa against this.”

Mr. Shadjareh, 70, has previously described Iran’s infamous supreme leader Ayatollah Khomeni, who issued the fatwa, as a “torch of light for the whole of mankind”.

The IHRC is primarily funded by its charitable arm, the Islamic Human Rights Commission Trust, which shares the same address in Wembley, North London.

The charity has funnelled more than £1.4 million in donations to the IHRC and has benefited from over £300,000 in taxpayer-funded gift aid donations over the last six years.

The IHRC Trust charity also received over £20,000 in Government grants during the pandemic.

NatWest to Pay for Hormone Treatment For Trans Staff