Sorry, Climate Change Hysterics. There Are Fewer Wildfires Today Than in the 1930s 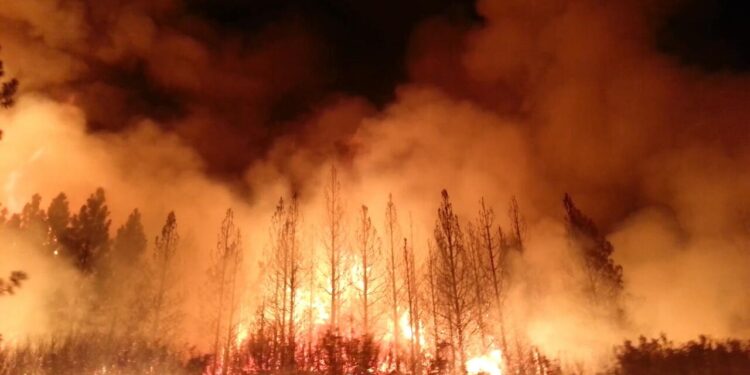 Last Wednesday, Matt McGrath reported on the BBC that the amount of tree cover being burned has nearly doubled over the past 20 years. Of the 9.3 million hectares burnt globally, Russia was alleged to account for more than a half. Of course, climate change was said to be a “key factor” in the increase. There is no factual basis for this claim, needless to say. Take the word of Greenpeace, which recently reported Russian government statistics that showed “nine out of ten wildfires in the country were caused by humans”.

McGrath, of course, was complying with the Corporation’s strictly-enforced agenda that says that almost every natural disaster and episode of extreme weather should be blamed on humans burning fossil fuel. The ultimate political agenda is the command-and-control Net Zero fantasy. Climate change was said to be the key factor by McGrath because it leads to higher temperatures and drier conditions. Except, it might be added, when global temperatures pause, as they have throughout most of the 21st century, and droughts turn into floods, etc., etc.

The data on tree loss comes from Global Forest Watch (GFW), which uses information taken from orbiting satellites. Last year was said to be the second worst year on record. “It’s roughly twice what it was just 20 years ago. It is kind of astonishing just how much fire activity has increased over such a short amount of time,” said James MacCarthy, an analyst with GFW.

The data used by GFW is taken from a number of Landstat satellites and processed by the Global Land Analysis and Discovery (GLAD) laboratory at the University of Maryland. But the GLAD data comes with a number of important warnings and caveats. The first satellites used in the 20-year record provided less data and there are gaps in the record. There was improved performance from 2012, but GLAD warned that “such changes in the mapping method can result in year-to-year inconsistencies”. Additionally, “models have been iterated to improve performance in the 2012-forward period”. Care must be taken when comparing change across any interval, it cautioned.

Above is the Russian graph on tree cover fire loss taken from GFW. It can be seen that the higher annual amounts started around the same time that improved satellite data came on stream. The past results going back to 2001 were flat for a decade, then different reporting and modelling came in, and they have been flat ever since, but at a higher level. Climate change is not the most obvious and rational reason to explain this ‘trend’.

Far from global fire losses being “staggering” over the last 20 years, as faithfully reported by McGrath and the BBC, it’s possible they have changed little in that period. That was the opinion of the Royal Society in October 2020 when it noted that there had been no overall increase in total area burnt by fire across the globe. In 2016, two academics from Swansea University, Professor of Wildfire Stefan Doerr and Dr Christina Santin, published a ground-breaking paper in which they disclosed that the global area burned “appears to have declined over past decades”. In fact, they noted, there was “increasing evidence that there is less fire in the global landscape than centuries ago”.

The academics went on to note that fire has been an important factor in the dynamics of the Earth’s climate and in the development of biomass since its widespread occurrence began 400-350 million years ago. They suggest fire suppression and alarm has arisen from focussing exclusively on first in the West by advocacy groups in the USA, Australia and Mediterranean Europe. They conclude that the attempt to bring all fire under control is “long proven to be impractical, unsustainable and ecologically detrimental in fire-prone reasons”.

The biblical catastrophising of fire is rampant throughout mainstream media. Most fires are caused by humans, whether accidentally or on purpose. For instance, in 2011 a research project funded by the Forestry Commission discovered that over 90% of South Wales grassland fires were recorded within 100 metres of a road or public right of way. The figure climbed to 99% if you extended the distance to 500m. But climate change is the only game in town these days. It seems nothing must get in the way of that narrative.

The graph above shows that U.S. wildfires were much worse in the past. Dramatic improvements have been recorded since the 1930s. Last year the National Interagency Fire Center suddenly removed all the collations prior to 1983, stating that “there is no official data prior to 1983 posted on this site”. Of course, 1983 is a convenient low point, meaning that the media can now faithfully report that wildfires have been increasing in the U.S.

The American meteorologist and climate writer Anthony Watts is less than impressed: “This wholesale erasure of important public data stinks, but in today’s narrative control culture that wants to rid us of anything that might be inconvenient or doesn’t fit the ‘woke’ narrative, it isn’t surprising.”

Postscript: One of the claims in this article – that there are fewer forest fires today in the U.S. than there were in the first part of the 20th Century – has been challenged by Dave Vetter, a “Sustainability Senior Contributor” to Forbes. Chris has replied to his criticisms here.