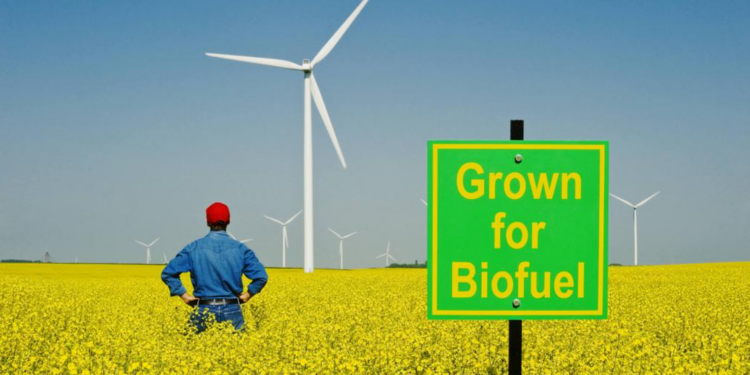 We’ve all been bombarded daily with horror stories about how food prices are being forced up and hundreds of millions of the world’s poorest risk starvation because the Russian invasion of Ukraine has prevented exports of grain and sunflower oil.

Well, let me give you some figures our politicians and the mainstream media don’t want to mention. They don’t mention these figures because these figures undermine the disastrous global-warming, climate-catastrophist, Net-Zero policies being forced on us by our rulers.

It’s more difficult to find out how much of the U.S.’s 38 million tonnes of wheat is used for biofuels, but it may be as much as a quarter. However, we do know that in the European Union, 12 million tonnes of grain, including wheat and maize, is turned into ethanol – around 7% of the bloc’s production. It’s estimated that this is enough food to feed around 150 million people if it wasn’t being used for transport fuel.

Also just in the EU, 3.5 million tonnes of palm oil is used to make biodiesel. That’s almost the amount of sunflower oil coming out of Ukraine and Russia combined.

Conclusion 2: We’re burning food rather than using it to feed people.

According to calculations done by scientists at Princeton University, if the U.S. and Europe were to decrease their use of ethanol made from grain by 50% – that would mean just moving back from E10 petrol to E5 petrol – they would effectively have sufficient extra crops to replace all of Ukraine’s exports of grain.

If our rulers were to completely scrap the biofuel mandates they have imposed on us, the world would be awash with food and food prices would fall significantly. Then the only reason for hungry people would be distribution problems caused by mismanagement, corruption and conflict.

When the EU first mandated that 2.5% of all fuel sold in the EU should be made from biofuels, worldwide food prices shot up – wheat, for example, doubled in price – and the UN’s Rapporteur for Food said: “It is a crime against humanity to convert agricultural productive soil into soil which produces food stuff that will be burned into biofuel.”

He further argued that biofuels would only lead to further hunger in a world where an estimated 854 million people – one out of six in 2007 – already suffered from the scourge; 100,000 people died from hunger or its immediate consequences every day; and every five seconds, a child died from hunger

We’re now at 10% biofuels and, if I have understood correctly, following new climate change legislation passed in the U.S. last week, the biofuel content of petrol may be increased even further. This will mean diverting more potential food to fuel production at a time of world food shortages and rocketing food prices.

This is madness. But it get worse. Biofuels are less efficient than fossil fuels – you get fewer miles or kilometres per litre or gallon and they damage car engines more than fossil fuels. Moreover, the huge amounts of energy required to produce biofuels mean that they are probably more environmentally-damaging than fossil fuels.

Scrapping the biofuels mandates in the U.S. and EU isn’t something that would take years or months to implement. It could be done this week and the results – more food availability and falling food prices – would happen immediately.

So, why won’t our rulers do this? Moreover, why do they seem to be moving in the opposite direction – by pushing ever more food into fuel production?

It could just be utter incompetence. Or it could be fear of a storm of criticism by the ever more vociferous climate-catastrophist lobby. It could be that they are trapped by their own save-the-planet virtue-signalling. Or it could be the classic reaction of politicians and bureaucracies – the more evidence emerges that their policies are misguided, the more they double down on those policies as they can never admit that they got it wrong.

However, for the conspiracy theorists, there’s a fifth possibility – that our rulers are acting together to deliberately restrict food production, push up food prices and impoverish us all as a means of increasing their control over us.

You can choose which of the five possibilities – incompetence, fear of the climate catastrophists, feeling trapped by their own subservience to the climate-catastrophist cult, doubling down on misguided policies or conspiracy against us – you believe is the most credible explanation of the current food crisis.