by Molly Kingsley and Liz Cole 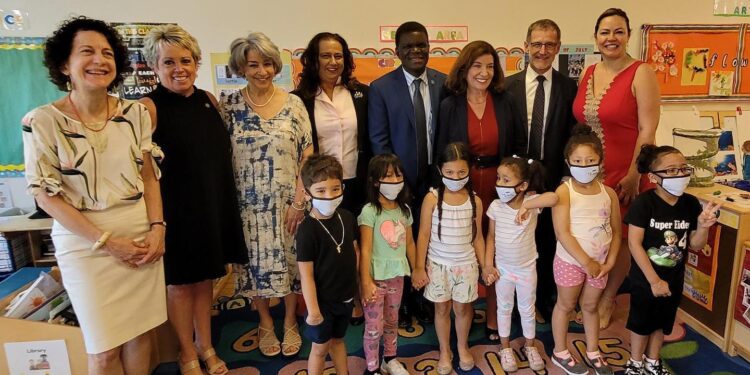 A photo circulating on social media in summer 2021 shows a scene which would have been unimaginable in 2019. In it, a row of small children – aged four or five perhaps – line up holding hands. They are all masked. Behind them stands a row of adults, one of whom is the Governor of New York. None of the adults are masked, and their smiles beam out at the camera. It is an archetypal example of the inversion at the heart of our global pandemic response.

Over the last two years the youngest members of society have often borne the heaviest burden of Covid restrictions, even though the risk from COVID-19 increases dramatically with age. This has created a deep and seemingly perverse inequity between adults’ and children’s lives, spanning contexts and borders. Indeed, it has become so ubiquitous that it risks becoming normalised.

At its most extreme, this upending of society’s natural responsibility to care for our young has endangered children’s lives.

In autumn 2020, U.K. university students finally returned to their campuses after months of isolation during lockdown. Even pre-pandemic, mental health issues were spiralling into a full-blown crisis for this age group. Barely out of childhood, this extremely vulnerable cohort deserves our protection and care. Yet, with a single-minded fixation on ‘protective’ measures, the institutions’ leadership too often discarded any compassion for these vulnerable teenagers in favour of decisions that can only be described as inhumane.

In November 2020, with the second lockdown underway, University of Manchester students awoke one morning to find metal barriers constructed around their halls of residence. The reported objective was to prevent student households from mixing. Horrified by the lack of prior warning, students protested by tearing down the barricades. The university backed down, but for a nervous 18-year-old away from home for the first time, the effective imprisonment must have been terrifying, and the mental health consequences could have been fatal.

Then, at the nearby University of York, during the same period, health and safety guidance decreed that in the event of a fire, self-isolating students should wait behind to allow ‘non-self-isolating’ colleagues to exit first. This ludicrous diktat not only displayed a profound lack of risk balancing, but also a dereliction of a fundamental duty of care and an ignorance of basic safety standards.

In January 2022, in a particularly shocking example, officers in Texas arrested a teacher for suspected child endangerment after her son was discovered in the boot of her car at a drive-through PCR testing site. The mother allegedly told officials that she had transported her child in this way so she wouldn’t be exposed to his infection.

These distressing cases testify to something deeply dysfunctional in our societal response to Covid. We have normalised the mistreatment of children, collectively justifying it against the backdrop of the pandemic state of exception.

This treatment of children should be unacceptable in any civilised society, no matter what respectability it is given by the cloak of ‘public health’. Much has been made throughout the pandemic response of the need for public health to act in the interests of an ill-defined concept of a ‘greater good’. Yet it’s striking that a now reengineered concept of ‘public health’ has barely acknowledged children as part of the ‘public’. In its name, we have not only marginalised our young people’s wellbeing, but often actively put them in harm’s way.

A pre-pandemic 2019 Public Health England strategy document lays out its vision and goals for the next five years. The document notes that:

Giving children the best start in life is vital for a healthy thriving society. The foundations of good physical and mental health, healthy relationships and educational achievement are laid in preconception through to pregnancy and the early years of life, which is when many inequalities in health often begin.

In crisis, we chose to cast aside these principles and priorities and inverted our public health paradigm by requiring the young to sacrifice their own health and wellbeing to safeguard that of adults. In doing so, we have shattered our implicit social contract.

In the brutal landscape of the Arctic Circle, reindeer do whatever it takes to protect their young. When the herd is threatened, the animals stampede in a cyclonic formation, making it impossible for predators to target an individual. A swirling wall of adult deer on the perimeter shields the fawns at the heart of the circle from harm.

How is it that the U.K. and most Western democracies have failed this basic tenet of nature, systematically and deliberately placing our young on the outside of our societal herd and demanding that they shoulder a burden that should never have been theirs to carry?

Molly Kingsley and Liz Cole are the founders of UsForThem, which since May 2020 has advocated that children be prioritised during the pandemic response. This is an extract from their new book The Children’s Inquiry: How the state and society failed the young during the COVID-19 pandemic, which is out now and you can buy here and here.

A devastating analysis of a country’s failure to prioritise its children and young people during a global disaster.

Professor Lucy Easthope, author of When the Dust Settles

Laura Dodsworth, author of A State of Fear

A truly important book. It needs to be read by policymakers and parents so that never again will our children be betrayed as they have been in the last two years.

Despite being least affected by the virus itself, children and young people bore the brunt of COVID-19 pandemic restrictions. When schools were closed, playgrounds taped up and play outlawed, children’s lives were closed down. The catastrophic impact on children and young people’s education, mental health, wellbeing, and life chances is becoming ever clearer, with the most disadvantaged suffering disproportionately.

In May 2020 Liz Cole and Molly Kingsley founded UsForThem to advocate – in an often hostile climate – for children to be prioritised during the pandemic response. Having heard from thousands of families, and having often clashed with policymakers, they have a unique perspective on how the state’s response to the pandemic has affected our children.

Here they document their shocking findings: how completely children’s health and welfare were sacrificed for that of adults; how policymakers appeared to disregard the harms they were causing; and how adults charged with protecting the young stood by and watched as children visibly struggled or slipped out of sight altogether. This dereliction of duty should haunt us for decades to come.

With exclusive testimony from academics, politicians, scientists, educators, and parents, as well as former Children’s Commissioners, the book exposes the problems at the heart of policymaking which led to the systemic and ongoing betrayal of children. From public health to politics, and from media discourse to safeguarding, the authors show how children were too often used as the means to further adult interests. Ahead of the public inquiry, the authors call for an honest appraisal of what went wrong, and commitment from stakeholders to reimagine – not just recover – childhood.