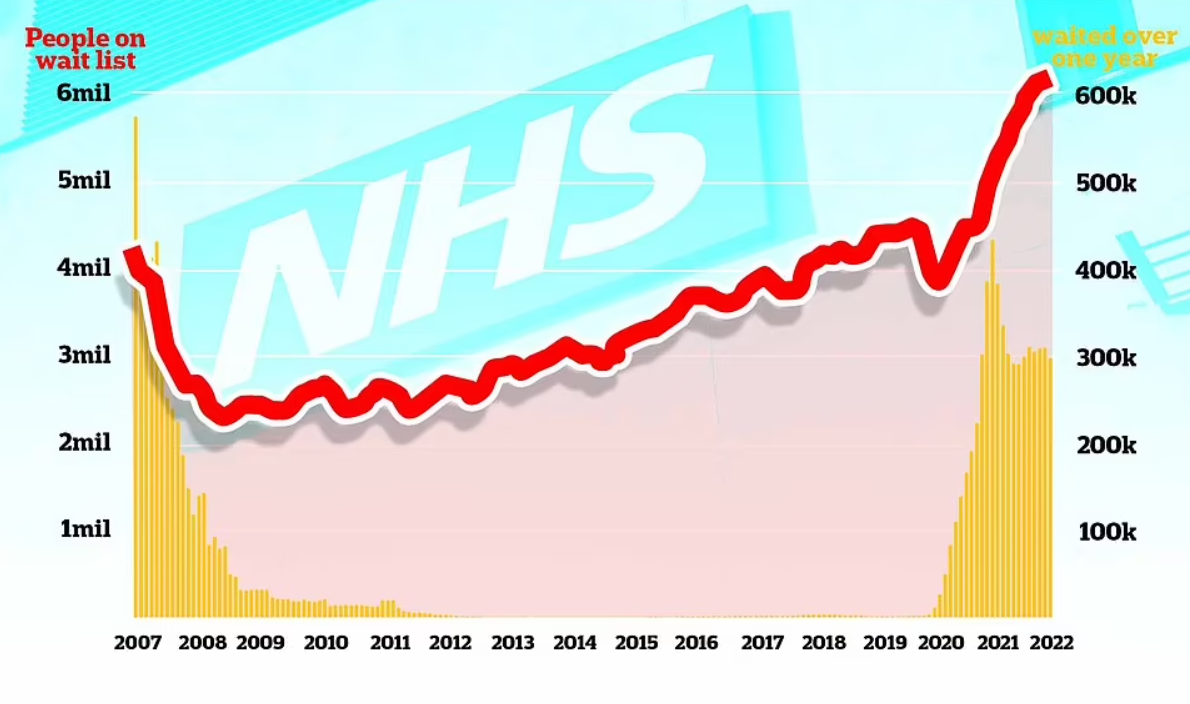 The number of patients waiting for routine hospital treatment in England has soared to a new record of 6.18 million, as ambulance and emergency department waits also reach all-time highs. MailOnline has the story.

NHS data show one in nine people were in the queue, often in pain, for elective operations such as hip and knee replacements and cataracts surgery by February – up from 6.1 million in January.

Separate data show A&E performance plummeted to its worst ever level in March, with a record 22,506 people waiting 12 hours to be treated, three times longer than the NHS target. Just seven in 10 patients in casualty units were seen within the four-hour threshold, marking the worst performance yet.

Ambulance figures reveal heart attack and stroke patients were left waiting for more than an hour for paramedics to arrive on average – another record.

Health bosses argue the NHS has faced its busiest ever winter and a slight drop among the longest waiters show it is tackling the backlog.

NHS leaders said the health service needs more cash to fill its 110,000 vacancies and ongoing problems in social care, despite receiving a record £136.1 billion this year to help it recover from Covid.

Ministers announced an elective recovery plan earlier this year, setting out how waiting lists will finally start to fall from March 2024, while two-year waits would be scrapped by the summer. But experts today warned “it is hard to imagine an end in sight, with lengthy waits for healthcare firmly here to stay”.

It comes as doctors today say record-high Covid infection are leading to operations being cancelled across England, despite daily admissions and the number of infected patients in hospital trending downwards.

How can this winter have been the “busiest ever” when excess deaths were trending below average throughout. Surely last winter, with the Alpha Covid wave in full swing, was much busier. Hard to sort the truth from the exaggeration in the messages coming out from the health service, particularly with health bosses lobbying for the return of restrictions.

Have they forgotten it’s the restrictions that got us into this mess, by telling people to stay at home when they’re ill, cancelling operations ‘because Covid’ and storing up the mother of all backlogs?