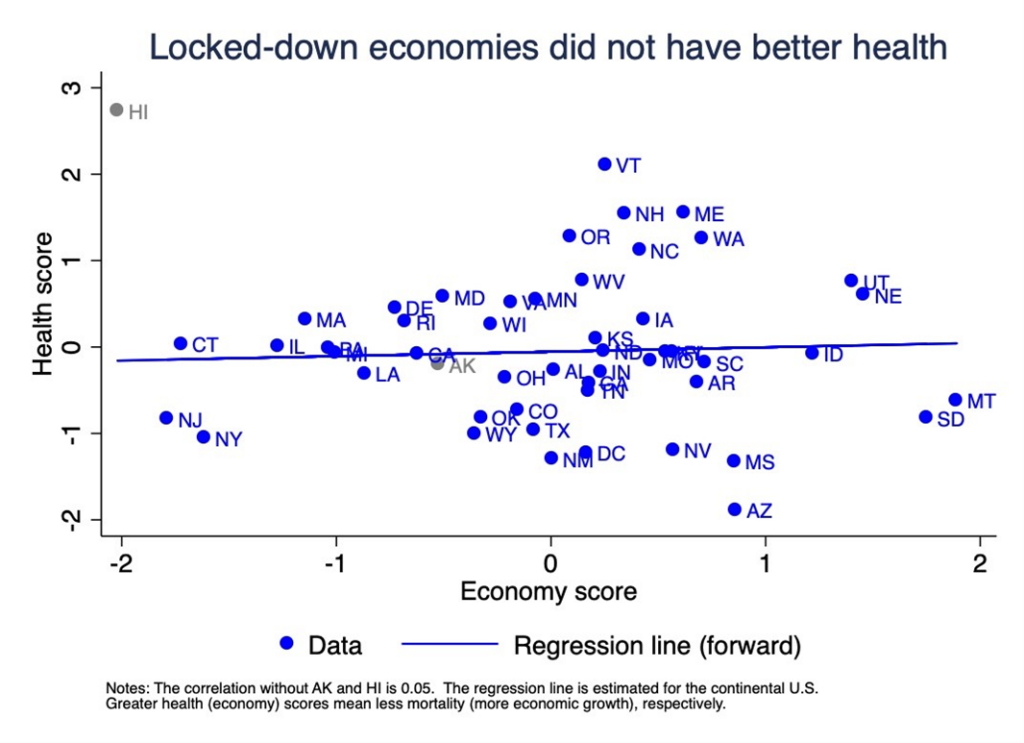 A working paper published by the National Bureau of Economic Research has scored and ranked U.S. states by their performance over the past two years on three measures – health, economy and education – before combining them into a composite score and overall rank.

The paper, entitled “A Final Report Card on the States’ Response to COVID-19“, is written by Casey B. Mulligan, Professor in Economics at the University of Chicago, Phil Kerpen, President of the Committee to Unleash Prosperity, and Stephen Moore of the Heritage Foundation. It is a follow-up to the preliminary report card the authors published in October 2020.

For economic performance the authors used two measures: unemployment and GDP by state. For education they used a single metric: the percentage of schools that stayed open in 2020-21 as tracked by Burbio (with hybrid instruction weighted half). For mortality they used two measures: Covid-associated deaths reported to the CDC and all-cause excess mortality.

Recognising significant underlying differences between states, the authors adjusted the scores to account for these factors.

Of course, even without a pandemic, states populations are heterogeneous and their economies emphasise different industries. And because the pandemic had a much more negative effect on economic output in some industries (such as entertainment, energy production, mining, hotels and food), we adjust unemployment and GDP changes for industry composition. We adjust Covid mortality (through March 5th, 2022) for age and ‘metabolic health’, by which we mean the pre-pandemic prevalence of obesity and diabetes – as these are highly correlated with higher death rates from the virus.

Like numerous other studies, the authors found no relationship between lockdowns (measured in this case by economic impact) and health outcomes. If anything there was a slight correlation between remaining open and lower mortality.

The pack was led by Utah, Nebraska, and Vermont, which were substantially above average in all three categories. Six more states followed in the top rank, including Florida and South Dakota.

The authors add that the four states with the highest rates of net outward migration from July 2020 to July 2021 – Washington D.C., New York, Illinois and California – were all in their bottom six. People aren’t so keen on living in lockdown states.

Here are the scores and ranks for age-adjusted Covid deaths.

And for age-adjusted excess deaths.

Another weighty nail in the lockdown coffin – though lockdown proponents seem very slow in accepting it.

The paper is worth reading in full.