Hong Kong’s Hospitals Are “Overflowing” – But Why, When Reported Cases and Deaths Are So Low? 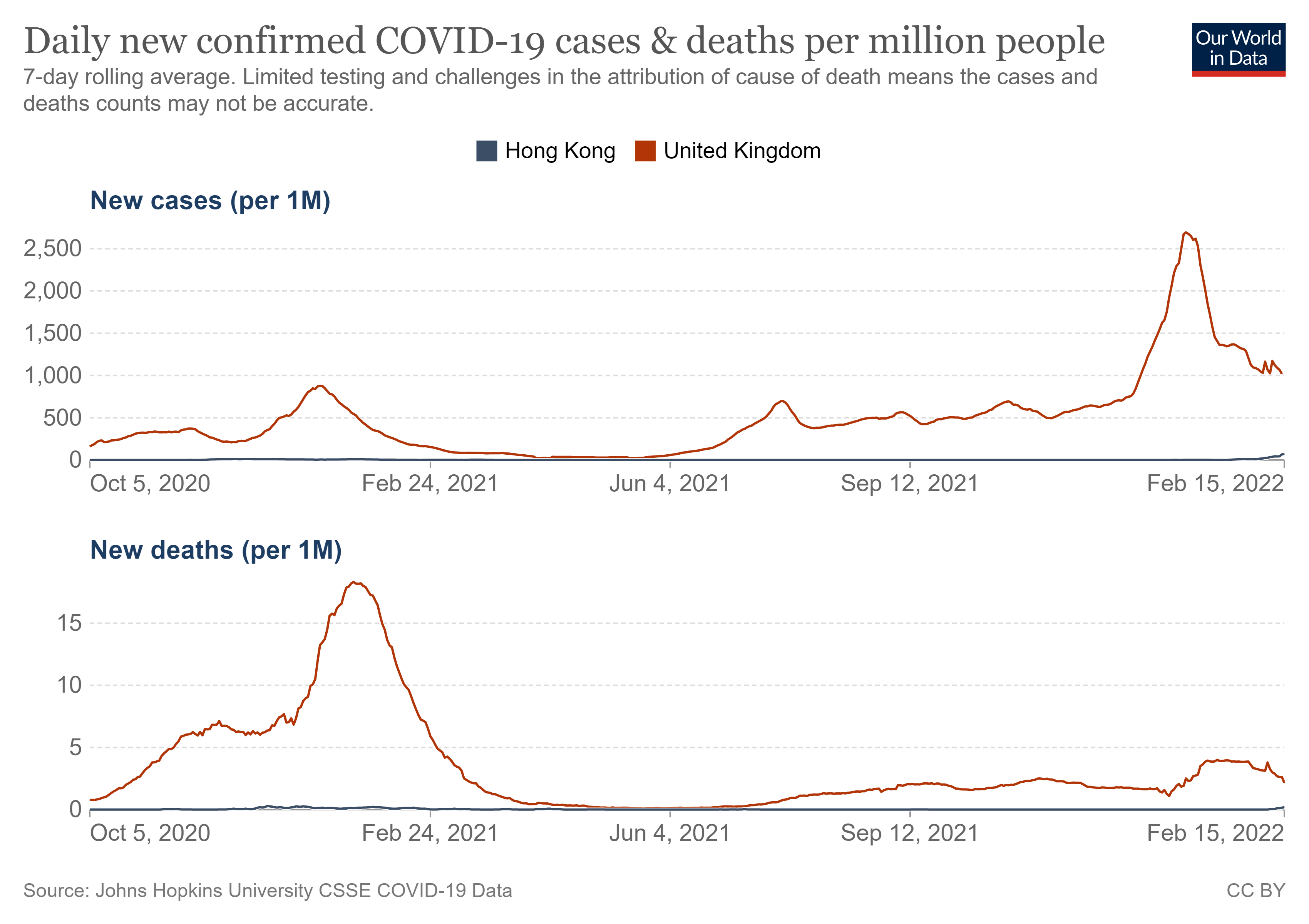 It’s being reported that Hong Kong’s hospitals are at capacity and overflowing with patients during the current Omicron wave. For example, Sarah Newey (from the Gates-funded Global Health Security team) at the Telegraph writes:

Hong Kong is battling a record Covid surge that threatens to overwhelm the city’s hospitals, with several hospitals already reported to have run out of space.

The crisis is being blamed on the arrival of the highly contagious Omicron variant and relatively poor vaccinations rates.

On Tuesday Carrie Lam, Hong Kong’s Chief Executive, warned that a fifth wave of infections has “outgrown our capacity”, as dramatic photos emerged showing dozens of patients waiting for care on medical beds outside A&E departments.

Makeshift tents have also been set up to treat people, while health authorities warned that several hospitals are already operating at over 100% capacity.

It comes as the city reported 1,619 new cases on Tuesday, according to official data, plus around 5,400 preliminary positive infections. This is on top of 2,071 new cases on Monday – the highest daily count since the pandemic began.

As recently as the end of January Hong Kong was reporting fewer than 100 daily infections, but some medical experts have warned this figure could skyrocket to almost 30,000 in March.

“The problem we are facing is given the magnitude, the pace of and the severity of this fifth wave, it has outgrown our capacity,” Ms Lam told reporters.

She added that while there are currently no plans for a “widespread city lockdown”, the situation would be continuously reviewed given the “severity and speed of this latest wave”.

Ms Lam also doubled down on Hong Kong’s ‘dynamic zero’ strategy which seeks to introduce strict, localised measures to curb transmission – much like the policy still in place in mainland China. So far, the city has reported 26,000 infections, including a little over 200 deaths.

Here are the three photos that accompany the story.

It obviously looks worrying, particularly when Hong Kong had so far avoided any severe waves of Covid deaths. That the city is only seeing hospitalisations surge now that the population is highly vaccinated and with the milder Omicron variant is something that requires explanation. Some would credit the city’s extreme infection control protocols, but Covid has been similarly mild in nearby Japan and South Korea – though Japan did have a moderate wave of deaths in spring 2021 and South Korea a moderate one this winter (pre-Omicron). Both countries are now seeing a strong Omicron wave and deaths in Japan are at a record high, though still low by international standards (see below). Why the rest of China is not currently reporting such a surge is also odd.

A further mystery is why Hong Kong hospitals are under such pressure at all when the city is currently reporting extremely low infection and death rates (see top and below). You might say the deaths are lagging, but the same can’t be said of infections.

Perhaps most of the infections are concealed somehow – Hong Kong reportedly requires every single positive Covid case to isolate in Government quarantine facilities, which surely gives a strong incentive to keep quiet about it. But even so, you have to wonder why an outbreak that is barely registering in reported infections or deaths (so far) is causing hospitals such problems.