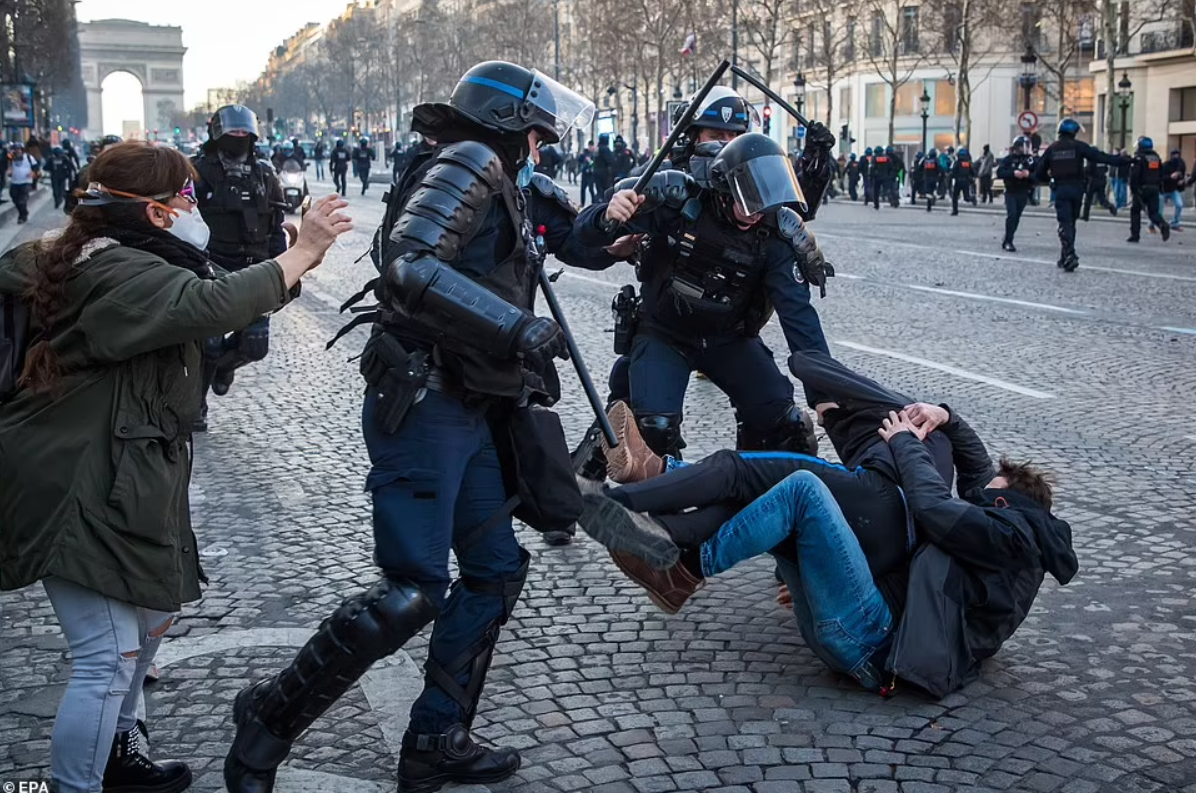 Freedom Convoy protests continue in Canada, France and New Zealand – three countries where extreme responses to Covid have persisted for two years and where the unvaccinated are particularly targeted with restrictions.

In Canada, trucks have now cleared the Ambassador Bridge after blocking the busiest border crossing between the U.S. and Canada for nearly six days. However, protests continue in Ottawa for the third weekend in a row. MailOnline has more.

Hundreds of people waving Canadian flags and holding anti-Trudeau signs braved the snow and cold temperatures Saturday as they filled the downtown area of the, walking between massive trucks that have been parked in place for weeks, paralysing the Canadian capital.

In Windsor, as the vehicles moved out, a handful of people who remained near the entrance of the bridge gradually grew and as of 1pm had turned into a large crowd of people who refused to leave. Police in black uniforms with yellow safety vests formed a line between the bridge and the crowd and have been steadily pushing back the demonstrators, as some shouted “shame”, “freedom” and “you’re on the wrong side”.

Windsor Police stated on Twitter around 11am that they could begin making arrests if protesters continued to block traffic.

“Enforcement continuing, individuals who are located within the demonstration area are subject to arrest,” the Windsor police wrote. “People are advised to immediately vacate the area.”

While the trucks and vehicles had exited the bridge, both directions still appeared to be closed off to traffic as of Saturday afternoon.

Police descended on the scene around 8:30am Saturday, warning protesters to “act lawfully” after the Freedom Convoy truckers in Canada ignored two deadlines overnight.

The ‘Freedom Convoy’ protests, which began in Ottawa by Canadian truckers opposing a vaccinate-or-quarantine mandate for cross-border drivers, entered its 16th day on Saturday. The demonstrations are also an outpouring of fury toward Prime Minister Justin Trudeau.

UPDATE: It’s reported that protestors have returned and been seen blocking the bridge again on Saturday night.

Families with children had to cover their faces with their mandatory Covid masks as they fled from tear gas in cafés on the streets of the French capital.

Paris has been brought to a halt with police also using baton charges on demonstrators making a Canadian-style ‘Freedom Convoy’ protest, defying a ban by authorities aiming to stop a blockade of the city.

Despite the presence of some 7,000 officers on the streets and armoured cars, Paris’s most famous roundabout – the Étoile (Star) around the Arc de Triomphe – was gridlocked by early afternoon as arrests were made.

Earlier in the day, police intercepted at least five convoys attempting to enter the capital and handed tickets to more than 200 motorists.

Protesters were detained amid a seizure of bladed weapons, slingshots and gas masks in one central Parisian square.

There were 54 arrests in Paris alone on Saturday, most for public order offences connected to the Freedom Convoys.

Trouble continued well into Saturday night, as protesters continued to confront the police all over the city.

By 8pm, police were still using tear gas canisters in areas including the Champs-Elysees.

In New Zealand, authorities have been struggling to shift protestors camped outside parliament in Wellington and have been trying different tactics, including bizarre ones like playing Barry Manilow and turning on sprinklers. MailOnline has more.

New Zealand authorities blasted Barry Manilow and turned on water sprinklers in an attempt to to disperse coronavirus vaccine protesters camped outside parliament.

Initial moves to try and flush out several hundred protesters who have been camped on the grounds in Wellington since Tuesday had little effect.

The protesters, who have been voicing their opposition to coronavirus vaccine requirements, responded to the soaking from the sprinklers by digging trenches and installing makeshift drainpipes to divert the water.

When a downpour struck on Saturday, their numbers only grew.

Protesters brought in bales of straw, which they scattered on the increasingly sodden grounds at parliament.

Some shouted, others danced and one group performed an Indigenous Maori haka.

By evening, parliament speaker Trevor Mallard had come up with a new plan to make the protesters uncomfortable: using a sound system to blast out vaccine messages, Barry Manilow songs and the 1990s hit Macarena on a repeat loop.

Protesters responded by playing their own tunes, including Twister Sister’s We’re Not Gonna Take It.

The protest began when a convoy of trucks and cars drove to parliament from around the nation, inspired by similar demonstrations in Canada.

At first there were more than 1,000 protesters but that number dwindled as the week wore on before growing again on Saturday.

Police have been taking a more hands-off approach since Thursday, when they arrested 122 people and charged many of them with trespassing or obstruction.

Officers who have been wearing protective vests but have not been using riot gear or carrying guns, had tried to slowly advance on the protesters.

That tactic resulted in a number of physical confrontations. A video of two female officers briefly dragging a naked woman by her hair from a scuffle went viral.

In a response to questions from The Associated Press, New Zealand police said they did not remove the woman’s clothing as some people had claimed online, and that she had been naked for “some time” before her arrest.

Police also said the images and videos did not provide the full context of the protest activity or the situation that police faced.

However, the scuffles seemed to prompt a strategic rethink by police, who appeared more content to wait it out as the week wore on.