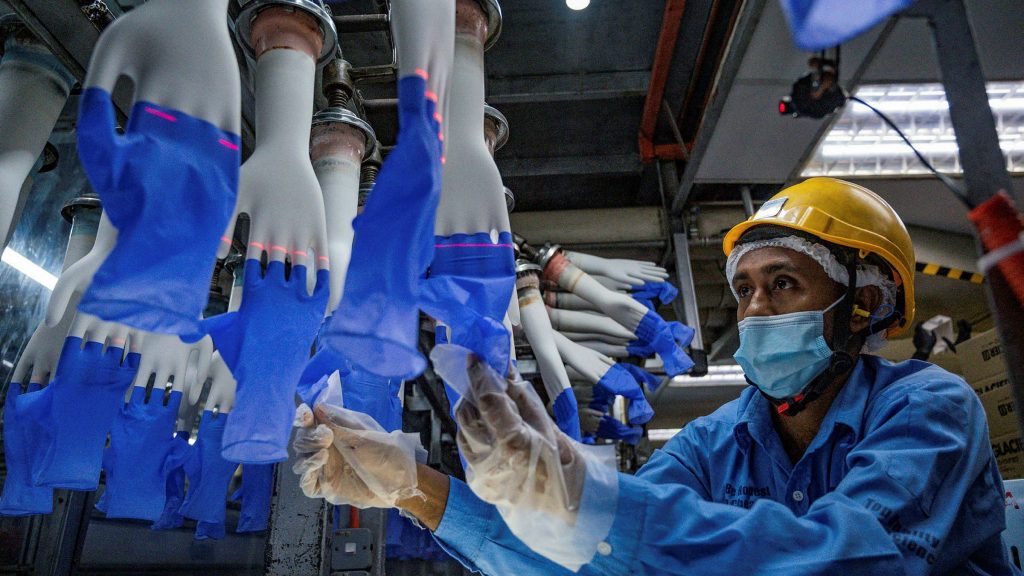 The Malaysian-based company Supermax, which was handed a £316 million contract to manufacture nearly 90 million rubber gloves for the NHS at the start of the pandemic, is under Government investigation after concerns that the business uses forced labour at its manufacturing plants. Last month, the U.S. banned Supermax imports after a similar inquiry concluded that modern slavery was involved in the making of rubber gloves. The Guardian has the story.

Officials at the Department for Business, Energy and Industrial Strategy (BEIS) are investigating Supermax, which won a £316 million contract for 88.5 million rubber gloves as the Covid pandemic began to unfold.

Last month the U.S. forbade the Malaysian company from selling its products there after an inquiry found “ample evidence” that it had used forced labour in the manufacture of its rubber gloves. Customs officers were told to seize any disposable gloves made by Supermax as part of a Government order banning the import into the U.S. of any goods made by forced labour.

The U.K. Government has instigated its own inquiry after Jeremy Purvis, a Liberal Democrat peer, demanded scrutiny of Supermax and action to ensure that products made using modern slavery are not used in Britain.

Rubber glove manufacturers in Malaysia have been accused of forcing employees to work long hours, confiscating staff’s passports, paying them derisory sums and ignoring Covid safety protocols in cramped manufacturing sites. Last year Supermax workers claimed they had to work 30 days in a row without a break and had paid high fees in their home countries to get the jobs. The company denied the allegations.

Speaking in the House of Lords on October 21st, a day after U.S. Customs and Border Protection adopted its tough stance, Lord Purvis asked the BEIS minister Gerry Grimstone: “Will the minister instruct an urgent inquiry to ensure that we are not using these products, which are a result of modern slavery in Malaysia?”

Lord Grimstone replied: “I will ensure that that particular company is looked at by my officials.”

Asked by the Guardian for details of the inquiry, a Government spokesperson said: “We take allegations of this nature very seriously and we are investigating the claims made against Supermax. We have made strong commitments to eradicate modern slavery from all contracts in the government supply chain.”

The Government made clear that the investigation could lead to Supermax being banned from supplying the NHS. “A proper due diligence process is carried out for all government contracts and our suppliers are required to follow the highest legal and ethical standards. If they fail to do so we will remove them from current and future contracts,” the spokesperson said.