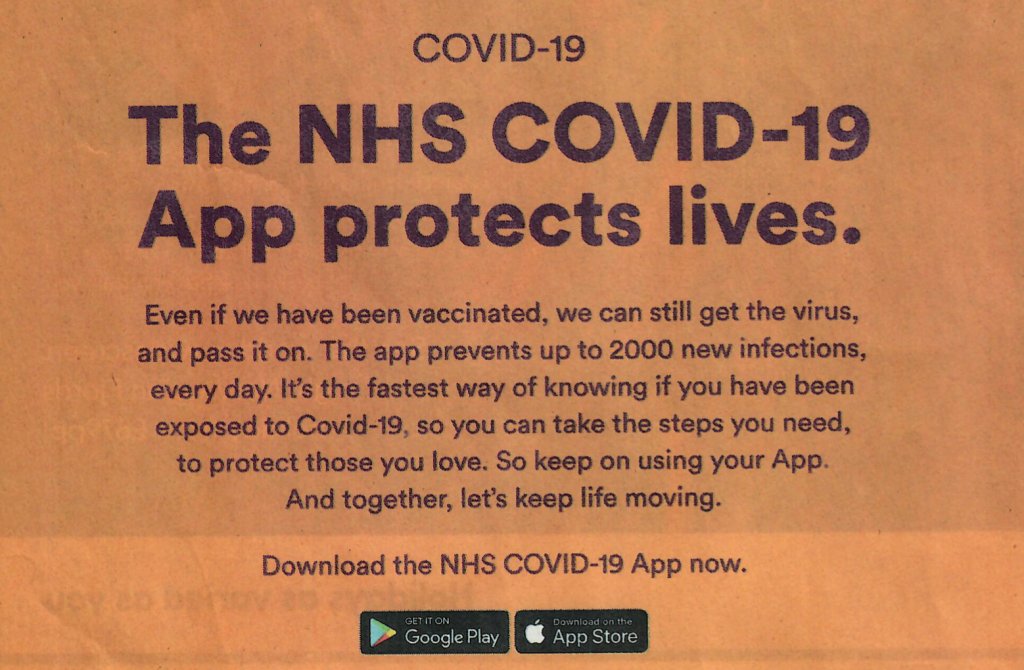 I received an email this morning from David Livermore, Professor of Medical Microbiology at the University of East Anglia, about the Government’s latest ad (see above). Apart from the inadvertent admission that ‘pinging’ is a woefully inefficient way of interrupting the chain of transmission, it’s breathtakingly illiterate. The drudge working for 23Red or Freuds, or whichever agency the Government has paid hundreds of millions of pounds to write its propaganda, has no idea how to use the simple comma. Prof Livermore queries one of them, but by my reckoning the commas after “virus”, “every day”, “need” and “together” are all superfluous. I would make a crack about the copywriter lacking a good GCSE pass in English, but, alas, you can get a First in English at Oxford these days and still be semi-literate.

Did you see this Govt advert… torn (rather badly) from Friday’s D Tel, and doubtless published elsewhere too?

Put aside the peculiar use of the royal “we”, the slippery “up to” and the redundant comma after “need”.

It’s the rare candour that matters.

First, the Govt is paying to say en claire that “Even if we have been vaccinated, we can still get the virus and pass it on”. That one sentence, which is supported by mounting evidence, demolishes their whole argument for Vaccine Passports.

Such figures would ordinarily lead any developer to conclude ‘Not fit for purpose’ and it is rare to see a ‘vendor’ damn their own product so comprehensively in so few of their own words. Gerald Ratner famously did it in the 1980s, describing a sherry decanter that his eponymous company was selling for £4.95 as “Total crap”. Which it doubtless was. But, at least he hadn’t developed the wretched thing using £22 billion of our money and didn’t have the temerity to suggest it was our moral duty to start using it.