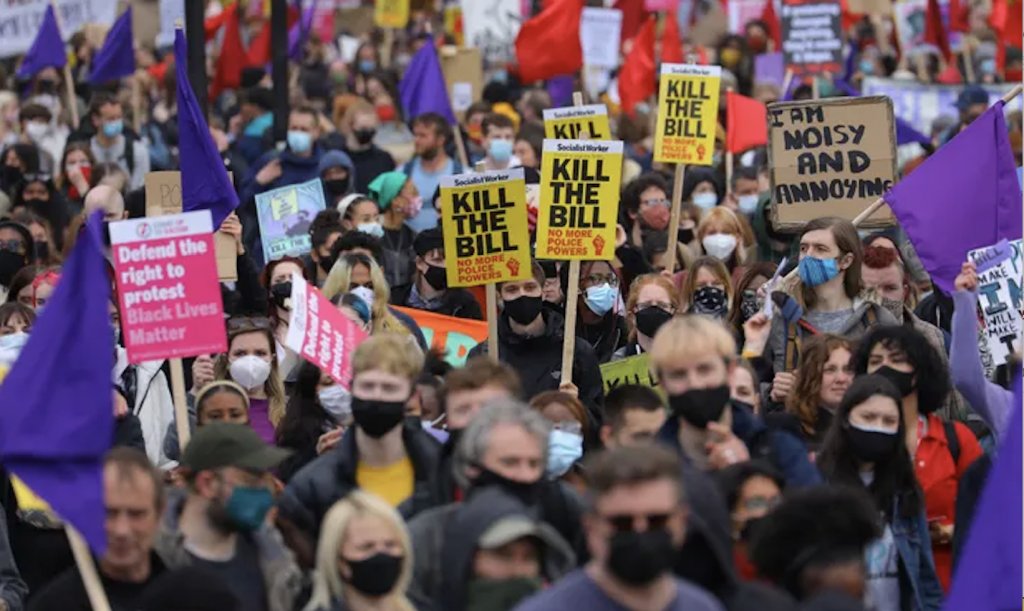 There follows a guest post by Dr Niall McCrae contrasting yesterday’s ‘Kill the Bill’ demonstration with the anti-lockdown march of a week earlier.

A week is a long time in the politics of rallies. Yesterday a Kill the Bill march in London drew five thousand mostly young protestors against the proposed strengthening of police powers over protestors. A good cause was distorted by the divisive identity politics on display: Black Lives Matter banners, transgender flags and radical Marxist placards supplied by the Socialist Workers Party. On the preceding Saturday (April 24th) a gathering twenty or thirty times bigger marched from Hyde Park to Holborn Viaduct and back in a joyful expression of unity by ordinary people of every class and creed.

Whereas the Unite for Freedom rally was initially ignored by the BBC and other mainstream media, the Kill the Bill demo was widely reported. Furthermore, coverage of the latter was sympathetic, as most keenly expressed in the Guardian. The most we heard from the BBC on the anti-lockdown protest was by Marianna Spring, who tweeted disparaging remarks about conspiracy theorists with a ludicrous underestimate of the crowd.

The reporting blackout ended later, after videos emerged of the police involved in a fracas with a handful of protestors near Speakers Corner. A group of marchers were basking in the last rays of a glorious sunny day, listening to an impromptu gig. They were doing no harm, but a squad of police officers steamed in, presumably to confiscate the audio equipment and arrest the band. The revellers linked arms and the police retreated in a hail of derision and missiles. “Ten arrests at anti-lockdown protest” reported the Sunday Times.

The Kill the Bill protest produced considerably worse behaviour. For long stretches “ACAB” – all cops are bastards – was chanted, and other aggressive phrasing imported from BLM/Antifa riots in the USA. Although the protest was against police powers, the marchers want freedom of expression “for me but not for thee”. These are the puritanical offspring of our education system, who think that any contrary opinion is “hate speech”. Quite a contrast with the all-embracing ethos of a week earlier.

Most of the Kill the Bill marchers were masked, although there is no requirement to do so outdoors. As the Kill the Bill walkers began to wander off, the lonely figure of Piers Corbyn tried to bridge the yawning gap between anti-lockdown and anti-police protestors. Old Piers has been working behind the scenes to bring left-wing activists into the campaign against the Covid regime, collaborating with BLM leader Sasha Johnson in his Let London Live Party in the London Assembly election. However, to the Kill the Bill crowd he seemed a cantankerous old man, who had come to the wrong show. Few stayed to listen, and those who did frowned and looked at him condescendingly. In exasperation Corbyn berated people for wearing masks: “wake up, they’re f***ing playing you!” But the Kill the Bill protestors are happy to be muzzled. And they get a good press, unlike lockdown sceptics.