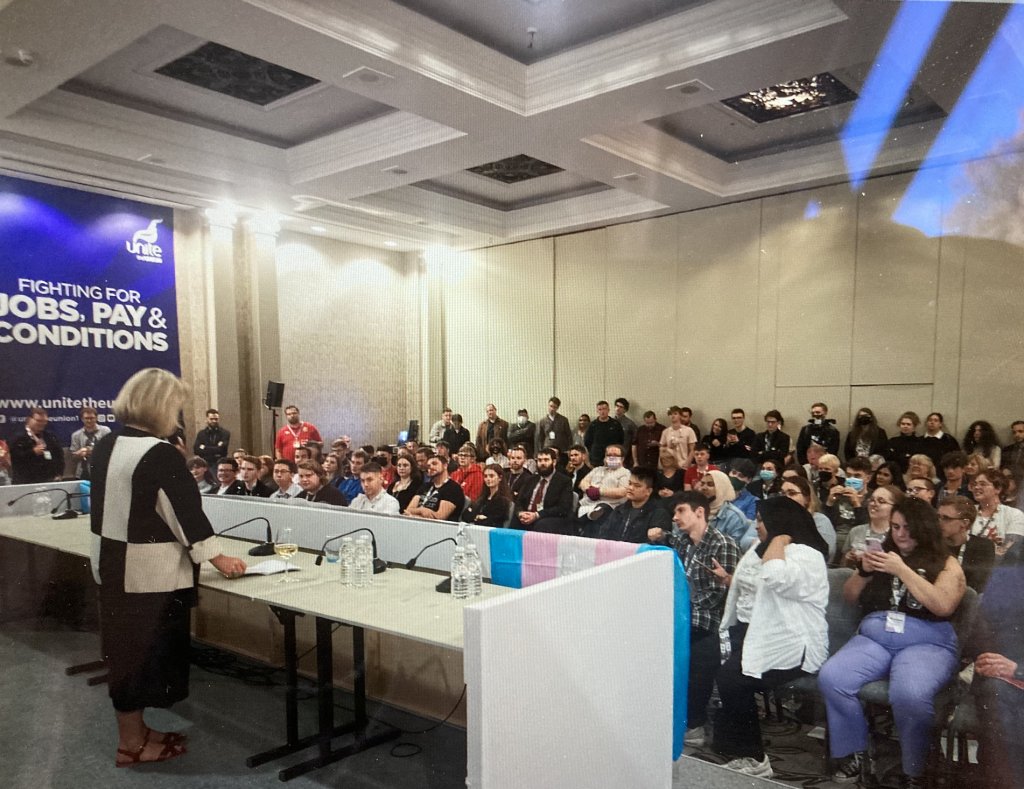 There follows a guest post by a senior academic at a large city-centre based university. He noticed that at a recent fringe at the Labour Party Conference addressed by Jo Grady, General Secretary of the University and College Union, almost no one in the audience was social distancing or wearing a mask. Yet the UCU has been absolutely insistent that it’s not ‘safe’ for its members to return to face-to-face teaching unless mandatory masking and social distancing mandates are in place across university campuses.

The University and College Union (UCU) has earned a reputation for being one of the most active unions in the U.K. It has also been one of the most vociferous pro-lockdown voices in the country. In October last year it threatened to take the Government to court in order, essentially to prevent students being permitted to return to campus in January. This year its aim is to ensure that universities mandate mask wearing, install expensive new ventilation systems, and maintain social distancing on site. Speaking from personal experience as a member of staff at a large city-centre based university, I can also confirm that local branches are equally strident, and that most staff meetings (still being held online, of course) tend to devolve into bouts of hand-wringing about how “unsafe” UCU members feel about having to teach students face-to-face.

So it was with interest that I studied this photograph, taken at the UCU fringe event held at the Labour Party conference on Sunday when the General Secretary, Jo Grady, was speaking. Note the distinct lack of mask-wearing or social-distancing.

Shared initially on twitter, this photo was quickly deleted (I happened to snap it on my phone, suspecting it would not be online for very long), and replaced with this pathetic apology/explanation. Jo Grady is apparently more interested in avoiding giving offence to the immunocompromised than she is in defending herself from the absolute hypocrisy that she has displayed. Her broader position seems to be that it’s okay for her to take a sensible approach to risk-taking, but not university students, academic staff or university administrators – presumably because they are too stupid or lacking in virtue.

What is behind the UCU’s stand on masks and social distancing? It can’t really be about stopping the spread of Covid – judging by this photo at least, the UCU movers and shakers certainly don’t feel such safety measures to be necessary. I don’t doubt that some members do still feel “unsafe” (I do know of a few). But it’s hard to avoid the conclusion that this has now for the most part simply become a glorified tantrum on the part of academics about having to pull their fingers out and do some work.

University lecturers have, by and large, had a good pandemic. Teaching online is a breeze: many lecturers have just been uploading old recordings of lectures and putting in a desultory performance at Zoom or Teams tutorials for the past 18 months. This has allowed them to focus on doing what they really care about: writing boring and unreadable papers about obscure topics interesting only to themselves, and tweeting. Those with young families have no doubt struggled, as in any other sector. But those who haven’t have found much to like about the Covid restrictions.

They are now being forced to return to normal – facing students in the classroom and actually having to therefore put some effort into teaching them. A significant minority don’t like this prospect, and are being dragged kicking and screaming back to campus. Making a big fuss about “safety” is the focal point for their rage: as any good psychologist will tell you, when somebody can’t openly express what they are really angry about (for example, having to actually do something in return for receiving a big fat salary), they find something else to make a fuss over (students not wearing masks). This, I think, explains an awful lot of the motivations of many UCU members.

I would like to close this piece by reminding readers that not all academic staff are UCU members, and in my experience a decent majority of lecturers are enjoying the return to proper teaching. Sadly, as so often in life, it is a relatively small but very loud-mouthed minority who are making things difficult for the rest of us.