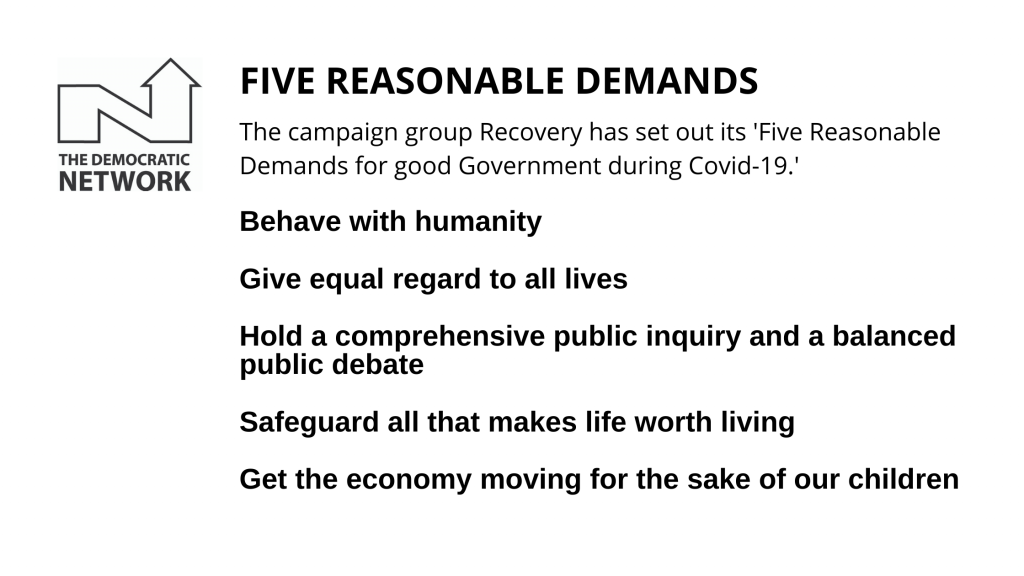 A new political party has been set up to give opponents of the lockdown policy an opportunity to stand as candidates in the forthcoming local elections.

The Democratic Network, set up by Nigel Jacklin, a statistician and market researcher, is looking for candidates to stand in May. To date, it is the only party that’s pledged support for anti-lockdown campaign group Time for Recovery’s ‘Five Reasonable Demands’.

2. Give equal regard to all lives

3. Hold a comprehensive public inquiry and a balanced public debate

4. Safeguard all that makes life worth living

5. Get the economy moving for the sake of our children

Nigel says about his reason for setting up the new party:

People want to send a message to the political establishment, and we can do that in May. We have no national ambitions. Our focus now is on the May local elections and we want to get elected.

If you’d like to be a candidate, or support other candidates, you can do so by completing the short survey (‘the Network Survey’) at the bottom of the page at www.TheDemocraticNetwork.org.

Jon Dobinson, the tireless organiser behind Time for Recovery, is supportive of the venture. He says:

Although Recovery has strong supporters in all the main political parties, the Democratic Network is the first to back our Five Reasonable Demands for good Government during COVID-19 as a party. I congratulate them on a very smart move – polling shows that the Five Reasonable Demands have the overwhelming support of the British public, for whom they represent a far less damaging way to overcome the challenges posed by COVID-19.

As the country starts to open up, we must face up to the huge damage that the harsh measures taken during the pandemic have done. As the charity MIND has highlighted, we now face a mental health pandemic caused by loneliness and the Government’s campaign of fear, which is costing millions of adults and even worse, our children their peace of mind.

There’s a massive NHS crisis that must be fixed urgently, with vital screening programmes cancelled and almost five million people now on waiting lists. Plus we have the worst economic outlook in living memory. Yet many politicians still back rules which are making all this worse.

Unbelievably, we still even have the Ofcom restrictions telling broadcasters to censor good news in case people think that COVID-19 restrictions are unnecessary – rules which are worsening the mental health problems of millions of us on a daily basis. It’s time to return to our senses: we urgently need all our parties to follow The Democratic Network’s lead.

The November online poll that Jon’s referring to was carried out by Yonder and involved a representative sample of over 2,000 people. It found that three quarters of people (77%) would support the adoption of the Five Reasonable Demands by the Government. Half (49%) would strongly support them, and only 3% opposed them.

Be warned: several friends of mine who got involved in the Vote Leave campaign in 2016 ended up being pursued mercilessly through the courts by the Electoral Commission in the aftermath of Vote Leave’s victory, often at the behest of embittered Remain activists. It’s a safe bet that if any of the Democratic Network’s candidates actually win in May, their defeated opponents will submit vexatious complaints to the Commission and, if its track record is anything to go by, those complaints will be energetically followed up. If it can find any pretext for doing so, it will make the lives of those candidates and the party’s officers absolutely miserable – a task made easier by the fact that the Conservative Government will be aligned with the Commission in this instance. From what little due diligence I’ve done, Nigel seems like a responsible, decent bloke who is doing his best to comply with the voluminous red tape that any political party has to wrestle its way through. But tread carefully.