No, the Monsoon Rains in Bangladesh are Not ‘Climate Breakdown’ 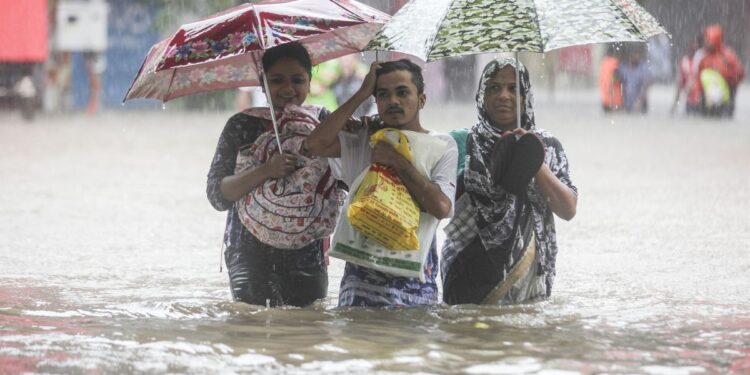 The monsoon season has started in Bangladesh, and the climate Armageddon stories are making their annual appearance in the press. Sky News reports that, “experts say that climate change is increasing the frequency, ferocity and unpredictability of floods in Bangladesh”. Great story, shame about the facts.

Paul Homewood has published the above graph, which tells its own story. The current flooding is reported to have caused over 60 fatalities and many homes are under water. But deaths from this cause have markedly improved since the 1970s. The country is sited in many geographically fragile areas, and is prone to tropical cyclones. But over 160 million people are sustained by good agriculture, increased manufacturing development and, pre-Covid, annual economic growth of around 6%.

But Bangladesh remains the poster country for climate disaster. USA Today reports that “millions of Bangladeshis face the prospect of becoming internal climate refugees over the next decades”. The international charity WaterAid, in an essay titled “Drowning in Climate Crisis”, states that the country faces a “severe and immediate threat from climate change”. Never one to miss a chance to broaden the narrative, the BBC notes the flooding and reports that “experts say that climate change is increasing the likelihood of events like this around the world”.

Monsoon rain damages and even washes away houses, and people are left homeless. But where USA Today gets its notion of millions of internal refugees is not immediately clear. Again, let us allow the actual facts to intrude on all the climate hysteria. Since the 1970s, the number of people left homeless by floods has fallen dramatically.

Bangladesh is located in a low-lying delta between the Himalayas and the Bay of Bengal. The country is mostly flat, except for some hilly areas in the northeast and southeast. Severe monsoon flooding is a regular occurrence in the country. According to research by a group of scientists from Shahjalal University, Bangladesh witnessed 16 flood events from 1954-2017. Three “extreme” flood events were noted in 1974, 1988 and 1998.

Few media outlets have the resources to cover natural disasters such as the Bangladesh floods on the ground, so rely on agency copy. Faithfully reported in a number of outlets including the Guardian and Al Jazeera was a note from Agence France-Presse that Bangladesh faced threats from “climate change-related disasters” such as floods and cyclones. “According to the UN’s Intergovernmental panel on Climate Change, about 17% of people in Bangladesh would need to be relocated over the next decade or so if global warming persists at the present rate,” it was reported.

Needless to say, this 17% figures is just an opinion. So desperate, it seems, are green activists to promote what they perceive as climate basket cases, that they will claim almost anything. In the meantime, the monsoons will come and go in Bangladesh, as they always have, but the country can be proud that in the last five decades, it has cut deaths dramatically, reduced the number of people made homeless to barely measurable figures compared to the 1970s, and dramatically slashed in 40 years the percentage of flood damage to GDP.

But it seems its high-ranking in the climate Armageddon club is assured, along with polar bears (numbers ticking up nicely), penguins (more of the little beasties being discovered every year) and corals (currently growing like Topsy on the Great Barrier Reef).

We Must Move On, But We Must Never Forget